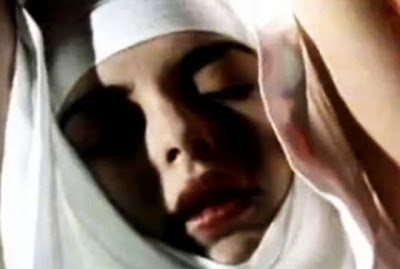 "Film banned for blasphemy to be released after two decades"The only film ever banned in Britain for being blasphemous is to be released in its original, uncut form after more than two decades. byJasper CoppingMarch 31st, 2012

The 1989 production Visions of Ecstasy was considered so shocking that the Government even fought a successful battle at the European Court of Human Rights to uphold the ban.But the film is now to be released in its original, uncut form after the British Board of Film Classification overturned its original decision. DVDs of the film will go on sale tomorrow, at the start of Holy Week.It comes at a time when many British Christians believe their faith is being increasingly undermined, over issues such as the wearing of crosses at work and gay marriage.The low-budget, arthouse production is about St Teresa of Avila, a sixteenth century Spanish nun and mystic who had visions of Christ, which lasted almost uninterrupted for two years. The 18-minute film is an interpretation of these visions and includes sexual scenes involving St Teresa and another woman, who represents her psyche. These are intercut with shots of the nun lying on Christ, who is still nailed to the Cross, and caressing him. The film was inspired by St Teresa in Ecstasy, the statue by Gian Lorenzo Bernini, the seventeenth century baroque sculptor, which is located in Rome.James Ferman, the then BBFC director, ruled that the film's sexual nature would inflame Christians and make it liable to prosecution under the blasphemous libel law.The board considered allowing the film to be shown with the offending sequence removed – but as that would have halved the running time, it said the only option was to refuse a certificate.The furore at the time was such that one Conservative MP, Sir Graham Bright, called for the film negatives to be destroyed as part of the banning order.However, the film, which featured three little known actors and music by Steve Severin of 1980s band Siouxsie And The Banshees, became a cause célèbre among anticensorship campaigners, among them Salman Rushdie and Fay Weldon, the authors, and Derek Jarman, the late filmmaker.In, 1996, Nigel Wingrove, the director, took the case to the European Court of Human Rights arguing that the ban violated his freedom of expression. But in a rare victory for the British government, he lost.Although the court did not consider whether the video itself was blasphemous, it ruled that the UK's blasphemy laws were consistent with the European Convention on Human Rights.However, in 2008, the laws were abolished by the Criminal Justice and Immigration Act which meant they could no longer be considered in the board's deliberations.Last December, Mr Wingrove resubmitted the film for approval, after clips started to appear on the internet. It will go on sale in high street shops from tomorrow, on DVDs which will also feature two other films by Mr Wingrove, as well as a gallery of national and international press cuttings from the time of the ban and a booklet on the subject. It will have an 18 certificate.Mr Wingrove, who went on to set up a company which specialised in horror films, said the release was a "victory for freedom of expression" but that he has "mixed feelings" about the film itself."Although there are bits I like about it, there are bits I don't," he added. "I did not make it to hurt or mock and I wasn't trying to be over the top."At the time, blasphemy was a very big issue and I think the film was caught up in it. But looked at now, it is very tame and of its time. The imagery is no different from what you see in many films and pop videos today."He said the film was intended to have been launched last month and was only being released in Holy Week because of a delay in preparing the accompanying booklet.However, David Burrowes, the Conservative MP for Enfield Southgate and member of the Christians in Parliament group, said: "The law may have changed in the last 20 years, but the potential for this film to offend has not and it is a shame that a film like this is being released at such a time. The timing seems particularly provocative."The Rev Sally Hitchiner, curate of St John's, Ealing, said: "I think it's interesting that religion continues to fascinate artists and film makers."The arts have always be used to express controversial ideas about a whole range of topics that may be taken as anti-religious but this has never stopped people using the arts to worship God as they will be in thousands of special Easter services and events this week."The BBFC said that without any possible breach of the law, it had no grounds on which to refuse classification.It said it "recognised the content of the film may be deeply offensive to some viewers", but that the decision to pass it "reflected the clear view of the public that adults should have the right to choose their own viewing, provided that the material in question is neither illegal nor harmful".The BBFC, which is in its centenary year, has refused classification to nearly 1,000 films.Derek Jarman [Wikipedia]
Posted by Mercury at 6:23 AM