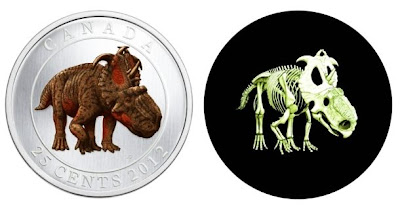 Heads or bones? Invisible during the day, the Pachyrhinosaurus' skeleton glows in the dark."Canada's newest coin glows in the dark"These collectible quarters featuring a dinosaur on one side will light up your pocket, but they cost $29.95 apiece.byTim HornyakApril 11th, 2012CBS Interactive
The Royal Canadian Mint just can't sit still. Like a hyperactive kid, it has revamped Canadian cash, first introducing plastic bills and then killing the penny. Now it wants people to play with glow-in-the-dark quarters.The mint's latest collectible coin features a dinosaur whose skeleton shines at night from beneath its scaly hide.It's actually two images on one face, which could be a world's first. The other side depicts Queen Elizabeth. Her Majesty does not glow in the dark.Made of cupronickel, the coin has a face value of 25 cents but is much larger than a regular Canuck quarter.It shows an artist's rendering of Pachyrhinosaurus lakustai, a 4-ton, 26-foot dinosaur discovered in Alberta in 1972. It's the first in a four-coin series of photo-luminescent prehistoric creatures.The mint says the skeleton can best be seen after the coin is exposed to sunlight, or to fluorescent or incandescent light for 30-60 seconds, adding that the luminescence won't fade with time.The glowing novelty is a first for the mint, but sadly it won't be for general circulation.The dino's mintage is limited to 25,000, and collectors who want to count their dinosaurs at night will have to pony up to the tune of $29.95. Canadian, of course. It launches April 16.

The shiny Pachyrhinosaurus may not be as cool as New Zealand's Star Wars, but at least it can keep you company in the dark.And if the mint can do something similar for coins in circulation, I might just enjoy wearing wearing holes in my pockets with them.cupronickel [Wikipedia] 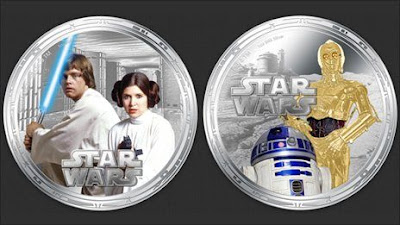