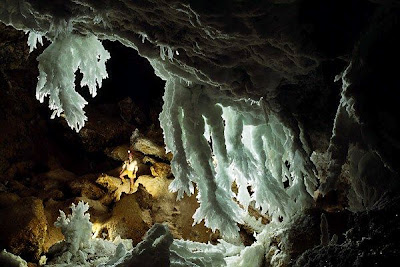 The Lachuguilla cave system, where scientists discovered antibiotic-resistant bacteria, is part of Carlsbad Caverns National Park in New Mexico. Above, an explorer admires the the Selenite Chandelier display in Carlsbad Caverns."Drug-Resistant Bacteria Discovered in 4-Million-Year-Old Cave"In pristine and ancient samples of bacteria, uncontaminated by human activity, researchers find resistance to several antibiotic treatments, both natural and man-made.byAlexandra Sifferlin April 12th, 2012Time
More than 400 meters below the Earth’s surface, in a virtually untouched 4-million-year-old cave, scientists have discovered antibiotic-resistant bacteria, whose existence could explain why the modern drugs we use to treat infections are failing.Our overzealous use of antibiotics, largely in hospitals and on animal farms, has long been blamed for fostering the emergence of drug-resistant “superbugs.” But the bacteria samples from the isolated Lechuguilla cave system in New Mexico suggests that drug resistance is actually an ancient trait. It’s possible that bacteria’s drug-resistance genes evolved millions of years ago in organisms like those on Lechuguilla’s cave walls, and are showing up in superbugs now through bacteria’s natural process of gene swapping.The pristine samples of bacteria taken from the cave revealed that the bugs are not infectious to humans but can fend off several types of antibiotics, including newer synthetic drugs“Clinical microbiologists have been perplexed for the longest time. When you bring a new antibiotic into the hospital, resistance inevitably appears shortly thereafter, within months to years,” study leader Gerry Wright, a chemical biologist at McMaster University in Ontario, told National Geographic. “It’s still a big question: Where is this coming from. Almost no one thought to look at other bacteria, the ones that don’t necessarily cause disease.”Since the discovery of the Lechuguilla cave in 1986, very few have been allowed to explore it, which makes it ideal for studying life that have been uncontaminated by human activity. Wright and his team looked at 93 types of bacteria procured from the cave, testing the strains against 26 different antibiotics. About 70% of the bacteria were resistant to three or four classes of antibiotics, and three of the strains — distant relatives of anthrax — resisted 14 of the 26 antibiotics.“Our study shows that antibiotic resistance is hard-wired into bacteria,” Wright told Scientific American. “It could be billions of years old.”Many questions still remain. The findings add to the evidence that antibiotic resistance is ancient, but it doesn’t explain how that resistance gets into hospitals or farms today. It’s also not clear how the cave bacteria’s seeming antibiotic resistance evolved, or whether it’s really resistance or something else. Stuart Levy, a physician and microbiologist at Tufts Medical School, told National Geographic:
“It’s an issue of which came first, the chicken or the egg? Did microbes generate the antibiotics down there, then resistance developed, or is it the other way around?” The cave bacteria, the thinking goes, may generate natural antibiotics during “chemical warfare” with their microbial competition.
But even if bacteria’s ability to evade drugs is entrenched in its evolutionary history, it doesn’t mean the health-care or livestock farming industries are off the hook. Indeed, Wright’s study comes on the heels of a U.S. Food and Drug Administration proposal asking drug manufacturers and veterinarians to drastically reduce their use of antibiotics in agriculture to prevent resistance.The researchers said they also discovered novel mechanisms of drug resistance in the bacteria they studied, another reason antibiotics must be used carefully. The authors write:
This fact further underlines the importance of the judicious use of antibiotics to avoid selection of existing resistance elements and their subsequent mobilization through microbial communities thereby limiting the effectiveness of these drugs to treat infectious diseases.
Posted by Mercury at 11:07 AM