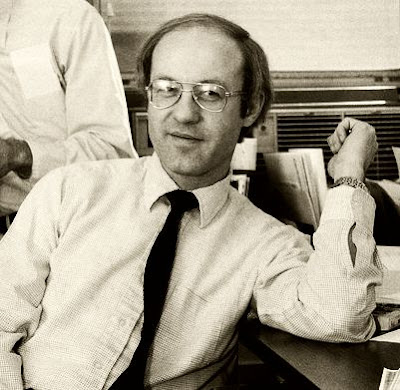 Roger C. MolanderNovember 20th, 1940 to March 25th, 2012"Roger C. Molander, Nuclear Protest Leader, Dies at 71"byDouglas MartinMarch 31st, 2012The New York Times
Roger C. Molander, who abandoned what he called the “priesthood” of cold warriors in the White House and the Pentagon to organize one of the nation’s largest and most colorful protests against nuclear arms, died on March 25 in Washington. He was 71.The cause was complications from liver cancer, his daughter Egan Molander Cammack said.Mr. Molander drew from his expertise as a Ph.D. in nuclear engineering to become an influential arms control analyst in the Defense Department and on National Security Council in the Nixon, Ford and Carter administrations. He became frustrated with the slow pace of negotiations with the Russians on nuclear weapons issues, and even more upset with the matter-of-fact approach some colleagues took toward atomic war.In April 1982, he told The New York Times about a meeting at the Pentagon that helped change his life.“A Navy captain was saying that people here and in Europe were getting too upset about the consequences of nuclear war,” Mr. Molander recalled. “The captain added that people were talking as if nuclear war would be the end of the world when, in fact, only 500 million people would be killed.”“Only 500 million people!” Mr. Molander exclaimed. “I remember sitting there and repeating that phrase to myself: ‘Only 500 million people!’ Only one-eighth of the world’s population!”After the Senate did not ratify the strategic arms limitation treaty signed by President Jimmy Carter in 1979, progress in arms negotiations stalled. The administration of President Ronald Reagan and the Soviet Union were building up armaments.Mr. Molander doubted that the experts, whom he termed a “technical priesthood,” could alone bridge the gap between the two nations. He concluded that Americans and Russians needed to speak on a human plane as well as a technical one.“I hope they spend most of their time talking about their kids, their grandchildren, and their friends, and their responsibilities to future generations, instead of all this missile stuff,” he told The Times in May 1982.Mr. Molander left the government in 1981 to start the grass-roots organization Ground Zero, taking its name from the point immediately below a nuclear explosion. His twin brother, Earl, was deputy director. In the third week of April 1982, Ground Zero organized a vast protest against nuclear war in which as many as a million people participated in about 800 cities and towns.Events included a “Run for Your Life” race in Winston-Salem, N.C., in which runners started at a “ground zero” marker in the center of town. Signs along the way depicted concentric circles of destruction from a nuclear explosion.At Columbia University in Manhattan, students staged a “die-in.” Their faces painted white, they lay on the ground as if struck by a bomb while a band played funeral music. Around the country, there were fasts, prayers and bicycle races.Mr. Molander wrote a small book to stimulate discussion, “Nuclear War: What’s in It for You?” It sold about 350,000 copies.The movement attracted wide support, from conservatives as well as liberals. Reagan said he was “heart and soul in sympathy” with the goal of educating people about nuclear issues. Others were ambivalent: the Washington Post columnist David S. Broder said the demonstrations might help prod the administration to the bargaining table, but he described them as verging on “liberal sentimentalism run amok.”Roger Carl Molander was born on Nov. 20, 1940, in Perham, Minn., and grew up in Marinette, Wis. He graduated from the University of Wisconsin, Madison, with a degree in mechanical engineering and earned a doctorate from the University of California, Berkeley.In 1973 as a Defense Department official, he was an aide to Paul Nitze, the chief American negotiator with the Soviets. Mr. Molander moved to the National Security Council as a senior staff member in 1974.Ground Zero dissolved into local initiatives and other peace organizations after the big 1982 demonstration, as Mr. Molander moved on to the Roosevelt Center for Policy Studies, a research group, as president and chief executive. He continued to work on arms control, as well as economic policy and other issues. He developed role-playing educational games to educate the public.Under the auspices of the Roosevelt Center, in 1988 Mr. Molander tried to elevate the discussion of arms issues among presidential candidates in the two earliest states to vote, Iowa and New Hampshire. He set up “crash courses” to bring candidates “up to speed” on these questions.Mr. Molander then became a senior analyst at the RAND Corporation. He developed many of the research organization’s “The Day After ...” projects, in which a hypothetical crisis is examined to determine what could have been done differently.In addition to his daughter Egan and his twin brother, Earl, Mr. Molander is survived by his wife of 37 years, Mary Moore; another daughter, Ingrid Molander; and two granddaughters.Earl and Roger Molander wrote an article for The Los Angeles Times in April 1982, pushing the idea that Russian-American conviviality might help peace.“So bring on the Russians,” they wrote. “Try their vodka, listen to their music, read their novels, watch them dance. Maybe take one to lunch and start a conversation on a topic of mutual interest. Try ‘the fate of the earth,’ for starters.”
Posted by Mercury at 6:41 AM