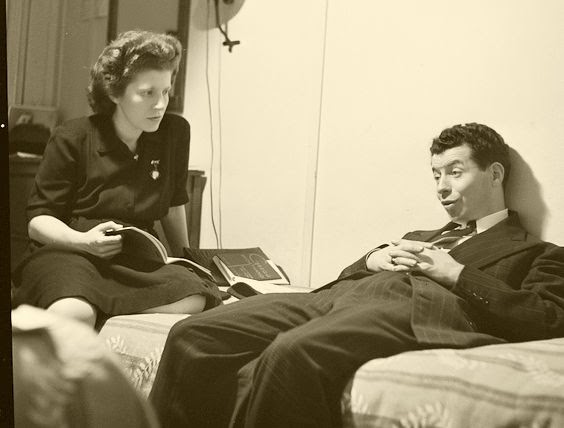 "What Do Philosophers Do?"

Outside of academia, that is.

The romanticized version of what it's like to be a philosopher must be one of the most appealing careers possible: read great thinkers, think deep thoughts, and while away the days in a beautiful office, surrounded by books, an Emeralite lamp, a hot mug of coffee, and perhaps a cat curled up by your feet. For the very few, your profound thoughts could revolutionize whole fields, herald new political ages, and inspire generations.

Of course, for many, academic philosophy proves a disappointment—an endless slog to publish, the tedium and heartache of departmental politics, and a dismal job market that tends to  people to far-flung college towns, far away from family and friends.

So what is a budding philosopher to do?

An informative series of posts by Helen De Cruz of New APPS: Art, Politics, Philosophy, Science features interviews with seven philosophy Ph.D.s who have left academia for the private sector. There's a software engineer, a television comedy writer, a statistical researcher, a consultant, a network-security engineer, and a search-engine developer. None of them are what would traditionally be thought of as a "philosopher."

In a few cases, they've found that their new jobs provide surprising platforms for further philosophical examination, such as the television screenwriter Eric Kaplan, who said, “I’m very interested in [the] tension between life and theory and mind and emotions; I explore that both in philosophy writing and in script writing.” Similarly, Claartje van Sijl, who now runs her own consulting and training company, says that the philosophy she studied informs the advice she gives. Her philosophy training, she explains, "has familiarized me with the greatest philosophical thoughts of 2500 years of history that I can now use as a sounding board for my clients’ and my own reflections."
But, for the most part, the philosophers aren't deploying their firm grasp of Kierkegaard in their private-sector work. Rather, it's the skills that philosophers are trained in—critical thinking, clear writing, quick learning—that translate well to life outside of academia. As Zachary Ernst, a software engineer at Narrative Science, puts it, "As a professional philosopher, if you haven't gotten over-specialized and narrow, then you've got really good analytic and communication skills. So you've got the ability to learn quickly and efficiently. You're also in the habit of being very critical of all sorts of ideas and approaches to a variety of problems. And if you've taught a lot, then you're probably pretty comfortable with public speaking. Those skills are very rare in almost any workforce, and they're extremely valuable."

This is not to say that the transition from academia to industry was easy. A few of the philosophers report that the dim view of private industry inside academia can stifle an exploration of what else might be out there. Ian Niles, the search-engine developer, advises, "Don't consider a job outside academia as 'slumming it.' Academia, for all of its virtues, instills a fear of the 'real world' in students, particularly graduate students."
To that end, another one of the philosophers noted that for all the training he received, very little of it led him to conclude that he might be able to make it outside of a university. Carl Baker, who is now a statistical researcher at the House of Commons Library, said, "If I had to highlight one weakness in my postgraduate training it would be the lack of discussion of how the skills developed during a philosophy Ph.D. can be used elsewhere."


"This Is What Your Professors Really Think About You Leaving Academia"

As university budgets shrink, more and more graduate students are seeking jobs outside academia. You'd think this would be a good thing for the world, but professors aren't convinced. In fact, many actively discourage their students from striving for non-academic jobs.

The Chronicle of Higher Education's Stacey Patton reports that at a recent conference on the topic of careers for grad students and postdocs, this issue came to the fore. University of California at San Francisco's director of career development, Bill Lindstaedt, showed a slide with comments he'd heard from faculty about students pursuing nonacademic jobs. They were dismissive of the idea that students might need such jobs, despite the tiny academic job market, and expressed no interest in helping students discover other career paths.

UCSF is a medical school, so all their work is focused on medical and scientific research. Here are some choice quotes:

"The problem isn't that there are too few faculty positions. The problem is that more students and postdocs are CHOOSING not to become faculty."

"It's my JOB to create more people like me."

"I'm very supportive of students in my lab who decide they want to leave academia. But they're smart. They'll figure out how to get there (alternative career) on their own."

"If a rotation student comes in saying they want to be a science writer, they're not staying [in my research group]."

"They shouldn't get distracted until after quals. And after quals, they need to be in the lab doing research. I don't want my students out of the lab teaching or other distracting activities."

"I made it and nobody helped me. Plus, I was the only woman in my graduate program. The best students will always succeed."

-Senior faculty member
As a science writer, I especially love the comment from the professor about how potential future writers will get kicked out. Because why would you want science writers who had formal scientific training in a lab, anyway? Better to complain later about how science journalists are "dumb" and just "don't get" science.

You'll note that a lot of these comments center on how university professors want their students focused on lab work, AKA the professor's research. So this reluctance to discuss outside careers is as much about wanting cheap grad student and postdoc labor as it is about wanting to create "more people like me," as one faculty member said.

But there are also more subtle causes for this disconnect between what professors prepare their students for, and what they can actually expect in the real world. Many senior researchers came of age in an era when university budgets were not taxed to their maximum, so they don't realize how uncommon a tenure-track position is anymore. And in my personal experience (yes, I was a grad student back at the turn of the millennium) there is also intellectual prejudice against nonacademic jobs. If you want to be a true scholar, you are supposed to stay in the Ivory Tower. Anything else is getting your hands dirty, or catering to mere commercial interests.

Whether it's out of clueless prejudice or a venal desire for low-paid lab assistants, professors may be endangering the future of their disciplines by assuming that university work is the only legitimate path. Scientists and researchers are leaving the academy, no matter what we do. As these freelance scholars come of age, gaining more power and legitimacy, it will be better for everyone if they regard academia as a possible partner in their future work — not as the place that used them up and threw them away.
Posted by Mercury at 6:18 PM