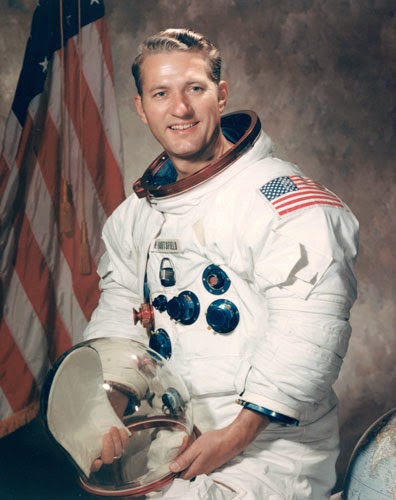 Over his career as an astronaut, Henry "Hank" Hartsfield Jr. spent many years in training and only 20 days in orbit — but they were very good days.

"I've never had so much fun," he once said of his first mission, a test flight of the shuttle Columbia that made a triumphant July 4 touchdown at Edwards Air Force Base in 1982. "We talked about turning the radio off and staying up there."

He was less ebullient in 1986, when the space shuttle Challenger exploded and seven astronauts perished. By then, Hartsfield, who had flown into space on the shuttles Columbia, Discovery and Challenger, learned that NASA officials had failed to inform him and others about a mechanical problem involving malfunctioning seals.

"I was surprised and angry we didn't know this," he told reporters. "If we don't make something better out of this, we're missing a safe bet. I think my friends who died would want us to be better for it."

Hartsfield, an Air Force test pilot who joined NASA in 1969 but had to wait 13 years before going into space himself, died July 17 in League City, Texas. He was 80.

His death was announced by NASA, which described its cause only as an illness.

An unflappable man with an Alabama drawl, Hartsfield was a space rookie at 48.

As copilot of the Columbia, he spent seven days in space with commander Ken Mattingly on a mission described by The Times as "rekindling America's love affair with manned space flight." When they landed, more than 500,000 people jammed Mojave Desert highways for a glimpse of the incoming Columbia. Fascinated by the venture, more than a million Americans had called a special phone line to listen in on the Columbia duo's laconic conversations with ground control.

Showing their support for the space program, President Ronald Reagan and First Lady Nancy Reagan were on hand to greet the returning heroes. "This has to beat firecrackers!" the president joked.

Columbia disintegrated on a mission in 2003, killing its seven-member crew.

In 1984, Hartsfield commanded the space shuttle Discovery on its maiden voyage, a flight that had been delayed by potentially lethal mechanical problems three times, once just four seconds before liftoff. At one point, he decided to keep his frustrated crew in their cramped capsule because of a fire on the launchpad.

"At a press conference we all lied about the tension in the cockpit following the abort and the fire," fellow astronaut Mike Mullane wrote in his 2006 memoir "Riding Rockets."

"Hank took most of the questions and did the 'Right Stuff' routine of 'Aaawh shucks, ma'am. Tweren't nothing."

In an interview, Mullane called Hartsfield "an empowering commander and a fierce patriot."
Hartsfield was so exuberantly right-wing that he deliberately took a bathroom break when the orbiter swung over Havana, Mullane said.

At Hartsfield's 50th birthday party, his colleagues ribbed him with gifts playing off his political leanings. One was an autographed copy of Ms. magazine with an inscription to Hartsfield from feminist publisher Gloria Steinem. It had been arranged by astronaut Sally Ride the first American woman in space.

Hartsfield's Discovery crew included Judith Resnik, the second American woman in space. During their mission, Resnik set up a solar array that led to one now in use on the International Space Station, Mullane said.

Resnik was among the seven who died when Challenger exploded in midair on Jan. 28, 1986, three months after Hartsfield had commanded it.

Born in Birmingham, Ala., on Nov. 21, 1933, Hartsfield grew up near a local airfield. As a newsboy, he won a free ride and was hooked on flying.

Graduating from Alabama's Auburn University with a physics degree in 1954, he joined the Air Force in 1955 and logged more than 7,400 hours of flying time in Germany and elsewhere. He also taught test pilots at Edwards. He later received a master's degree in engineering science from the University of Tennessee.

In 1966, he was assigned to the Air Force Manned Orbiting Laboratory — a project that never got off the ground. Three years later, he joined NASA, where he was on the astronaut support crew before his space flights and an administrator from 1985 to 1998. He worked for Raytheon Corp., a defense contractor, until his retirement in 2005.

Hartsfield's survivors include his wife, Fran; daughter Judy Hartsfield Gedies; two grandsons; and his brother Earl. His daughter Keely, who worked as a contractor to the space shuttle program, died in March.

Henry Hartsfield Jr., who flew on three NASA space shuttles, including as the pilot of the final test flight of the Columbia and as the commander of the maiden mission of the Discovery, died on Thursday. He was 80.

His death was announced by the space agency, which did not say where he died or specify the cause.

Both courageous and fortunate, Mr. Hartsfield flew on the two shuttles — the Columbia and the Challenger — whose histories ended in calamity.

An Air Force pilot who became a NASA astronaut in 1969, Mr. Hartsfield was a member of the astronaut support team for Apollo 16 in 1972, the fifth mission to land men on the moon, and of three Skylab missions. But he did not make his first spaceflight until 1982, when he was part of the two-man crew (along with the commander, Thomas K. Mattingly II, a Navy captain) of the Columbia, the first of the reusable winged planes known as space shuttles, on its fourth and last test flight.

Over seven days, the two men orbited Earth 112 times and, among other things, studied the effects of long-term thermal extremes on elements of the ship and performed arcane genetic experiments involving fruit flies and brine shrimp. Gliding to a smooth landing at Edwards Air Force Base in California on July 4, they were greeted by an estimated 500,000 onlookers, including President Ronald Reagan.

The Columbia eventually flew more than two dozen operational missions, with its astronauts repairing satellites (and, in 2002, the Hubble Space Telescope) and conducting myriad scientific experiments. On a flight in 2003, it broke up during its re-entry into Earth’s atmosphere, and all seven crew members died.

In 1983, Mr. Hartsfield, who had left the Air Force in 1977 and was serving NASA as a civilian, became the commander of a six-person crew — the others had no spaceflight experience — for the third shuttle, the Discovery. (The second was the Challenger.) After 16 months of training, on June 26, 1984, just before 8:43 a.m., the six were awaiting liftoff as the countdown began at Cape Canaveral, Fla. But computers detected an apparent valve failure in one of the main engines, and the flight was aborted at T minus four seconds.

“I honestly had no concern,” Mr. Hartsfield said at a news conference. “There was a moment of being startled. I think I used an ‘expletive deleted’ and said, ‘We’re not going anywhere.’ ”
The Discovery finally took off at the end of August and successfully completed a six-day mission, circumnavigating Earth 96 times before landing at the Edwards base on Sept. 5.

In flight, the crew deployed three satellites and unfolded an experimental solar power array, extending it out into space from the ship in the first test of electricity-generating systems for space stations. Crew members conducted several scientific tests and photography experiments using the Imax motion picture camera. The crew earned the name Icebusters after Mr. Hartsfield used a robotic arm to dislodge a chunk of ice from the side of the craft that could have caused damage on re-entry.

“We’ve got a good bird there,” Mr. Hartsfield said about the Discovery after the landing.

Henry Warren Hartsfield Jr., known to friends as Hank, was born on Nov. 21, 1933, in Birmingham, Ala., where he graduated from high school. His father, a self-educated bookkeeper, was an office manager for a general contractor. Mr. Hartsfield received a bachelor’s degree in physics from Auburn University, where he was in the Reserve Officers Training Corps, and did graduate work at Duke and at the Air Force Institute of Technology at Wright-Patterson Air Force Base in Ohio.

Eventually, after joining NASA as an astronaut, he earned an advanced degree in engineering science from the University of Tennessee. He entered the Air Force in 1955, serving with the 53rd Tactical Fighter Squadron in Bitburg, Germany, and graduated from the Air Force Test Pilot School at Edwards Air Force Base.

When Mr. Hartsfield’s career as an astronaut ended, he worked for NASA on the ground; he was part of the team that planned the deployment of the International Space Station. After retiring from the agency, he was an executive at the Raytheon Corporation.

Altogether, he logged 483 hours in space. He made his third and final spaceflight in October 1985, as the commander of an eight-person crew aboard the shuttle Challenger, which was carrying a German Spacelab and conducted experiments in the areas of physiological sciences, materials processing, biology and navigation. The flight, 111 Earth orbits in seven days, preceded a catastrophe. On Jan. 28, 1986, less than two minutes after liftoff on its next flight, the Challenger disintegrated in midair. In an eerie foreshadowing, a seven-member crew perished.