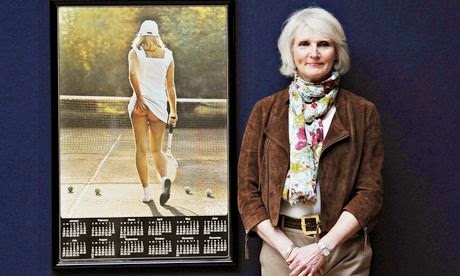 The white minidress worn by the model in the famous 1970s "Tennis Girl" poster has been sold for £15,500 at auction.

The price was almost eight times the £2,000 estimate set by Fieldings Auctioneers in Stourbridge, which offered the dress along with the tennis racquet featured in the image and two copies of the poster.

The picture featured 18-year-old Fiona Butler and was taken at the University of Birmingham by her boyfriend at the time, Martin Elliott. She was not paid for her modelling.

Elliott, who died in 2010, sold the image licence for the 1977 Athena poster, which sold more than 2m copies.

The identity of the woman in the picture had been unknown until Fiona Butler – now Fiona Walker, 55 – came forward in 2011. "It never ceases to make me smile when I see it," she said at the time.

The dress was made by Butler's friend Carol Knots. "As I played tennis at the local club in Stourbridge, I bought a 'Simplicity' pattern and made my own dress, complete with lace trim. Fiona was a friend and one day asked if she could borrow my dress and racquet," she said before the auction.

"When she returned them, she gave me a big box of chocolates as a thank you. I've had the dress tucked away in a cupboard for all those years. It's a little piece of tennis history and I hope someone might find it an interesting novelty item to buy," she said.

Elliott, whose reputation as a photographer was established by the global success of the picture, split with his girlfriend three years after it was shot.

Walker's pose has been imitated by many over the years including pop star Kylie Minogue, comedians Frank Skinner and Ricky Gervais, and tennis legend Pat Cash, as well as Britain's Got Talent judge Amanda Holden, who was photographed in her tennis whites last month.

The identity of the purchaser has not been revealed. The auction was held ahead of the Wimbledon ladies' singles final.
Posted by Mercury at 6:30 PM