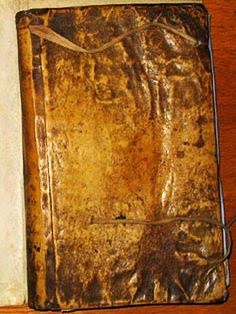 "It Was Once 'Somewhat Common' to Bind Books With Human Skin"

You think Twitter is weird? Look at early print culture and the practice of what book historians call anthropodermic bibliopegy. That would be binding books in human skin.

And while I now find the notion grotesque, the me of the 17th or 19th century would not have, apparently.

"While books bound in human skin are now objects of fascination and revulsion, the practice was once somewhat common," writes Heather Cole, assistant curator of modern books and manuscripts at Harvard's Houghton Library. "Termed anthropodermic bibliopegy, the binding of books in human skin has occurred at least since the 16th century. The confessions of criminals were occasionally bound in the skin of the convicted, or an individual might request to be memorialized for family or lovers in the form of a book."

Houghton, where Cole works, has one such books in its collection which is, putatively though not definitively, bound in skin.

A recent article in JAMA Dermatology featured a short examination of the book, along with a rousing call for greater study of books bound in human skin. The title was: "Anthropodermic Bibliopegy: Lessons From a Different Sort of Dermatologic Text."

"On examination of the bookbinding, numerous follicular ostia are clearly visible and provide a raised, coarse texture to the front and back covers," Harvard dermatologist Vinod Nambudiri writes. "The pages are gilt-edged. The bookbinding has an even, golden-brown background hue. Focal areas of darker brown pigmentation likely reflect variation in the literal 'skin tanning' process underlying the binding’s production and consequences of handling over the book’s existence rather than melanocytic proliferations in the native skin based on examination with epiluminescence microscopy."

And one can imagine a curious dermatologist would want to know precisely how the skin might hold up. Nambudiri further notes that the books "serve as reminders of the versatility of the body’s largest organ—both during life and beyond." He also says they "represent an elite class of dermatologic texts which deserve further study, cover to cover."

And it may be that further testing may prove that they are not, in fact, bound with human skin. For example, a book at the Harvard Law School bore this inscription:


The bynding of this booke is all that remains of my dear friende Jonas Wright, who was flayed alive by the Wavuma on the Fourth Day of August, 1632. King Mbesa did give me the book, it being one of poore Jonas chiefe possessions, together with ample of his skin to bynd it. Requiescat in pace.

However, it turns out, after scientific testing, the binding is just sheepskin.

No word on if or when the Houghton specimen will undergo the peptide mass fingerprinting test that revealed Jonas Wright's dear friende to be a liar.
Posted by Mercury at 1:50 PM