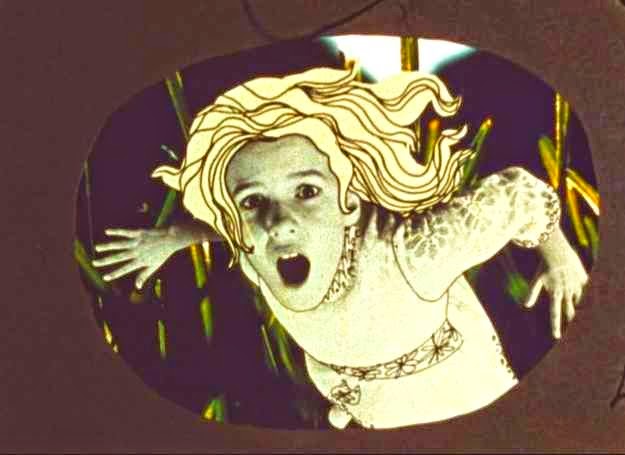 In this film made by the National Institute of Mental Health in 1971 and meant for use with 8- to 10-year-old students, Alice takes a psychedelic trip through an animated Wonderland.

Lewis Carroll’s story was a staple of drug culture in the late 1960s and early 1970s. Trying to speak to a young audience, people making anti-drug propaganda repurposed the tale to their own ends.

In a famous example, Jefferson Airplane’s song “White Rabbit”—a celebration of the mind-bending properties of “feeding your head”—was the inspiration for the “anonymous” book Go Ask Alice. This narrative, written in journal form, depicted the downward slide of a supposedly “real” teenage girl who goes from straight-laced goody-two-shoes to drug casualty in record time. Go Ask Alice came out in March 1971—the same year that this movie was produced.

In the beginning of this film, Alice falls into a room full of cigarette machines, medicine cabinets, marijuana leaves, and bongs. She soon has a series of disturbing encounters.

Alice comes upon the Mock Turtle smoking marijuana from a hookah; the King of Hearts, who offers her heroin; and the March Hare, a tweaker who beats his foot on the ground constantly: “You oughta have some pep pills! Uppers! Amphetamines! Speed! You feel super good.”

The Alice character is meant to be the voice of reason, lecturing the creatures: “You live in this beautiful place. It could be wonderland! And all you do is … take drugs!” But the swirling animation is so fun, it’s hard to believe that a young viewer would pay her arguments any mind.

Indeed, the National Archives’ blog Media Matters tracked down a review of the film in a 1972 publication of the National Coordinating Council on Drug Education. The NCCDE wrote that “Curious Alice” was of dubious value in the classroom, noting that viewers “may be intrigued by the fantasy world of drugs” after watching it.