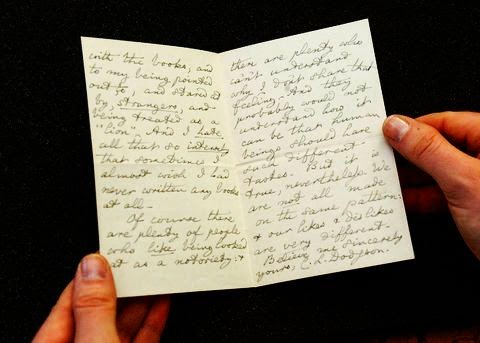 Charles Dodgson, the author and mathematician better known as Lewis Carroll, wrote about a young girl lost in surreal dreamscapes. But Dodgson had trouble navigating treacherous landscape of his own: literary fame.

The author of Alice's Adventures in Wonderland and Through the Looking-Glass wrote in 1891 letter to one Mrs. Symonds, explaining his particular discomfort with his fame:


I don't think I explained successfully my reasons for disliking letters of mine being put into autograph-collections. All that sort of publicity leads to strangers hearing of my real name in connection with the books, and to my being pointed out to, and started at by, strangers, and treated as a 'lion.' And I hate all that so intensely that sometimes I almost wish I had never written any books at all.

The letter was recently sold through Bonhams at auction for £11,875 by the University of Southern California, meaning the anti-fame missive has landed in a place very much obsessed with fame: Los Angeles.

A letter by Lewis Carroll declaring his hatred for fame and sometime wish that he had never written “Alice’s Adventures in Wonderland” has now found a home in the epicenter of the global celebrity hellscape: Los Angeles.

The University of Southern California announced that it is the new owner of the letter, which was purchased anonymously at the London auction house Bonhams in March for $19,800, several times the estimate.

In the three-page letter, written to his friend Anne Symonds in 1891, Carroll (whose real name was Charles Dodgson) railed against collectors of his autograph letters. “All of that sort of publicity leads to strangers hearing of my real name in connection with the books, and to my being pointed out to and stared at by strangers and being treated as a ‘lion,’” he wrote. “And I hate all of that so intensely that sometimes I almost wish I had never written any books at all.”

In a statement, Abby Saunders, the curator of the university’s collection of more than 3,000 books, pamphlets, games and other items relating to Carroll, acknowledged the dry humor that could be made of the new acquisition. “Here in Los Angeles, where celebrity culture goes hand in hand with the film industry,” she said, “Carroll’s thoughts on fame are especially poignant.”
Posted by Mercury at 6:06 AM