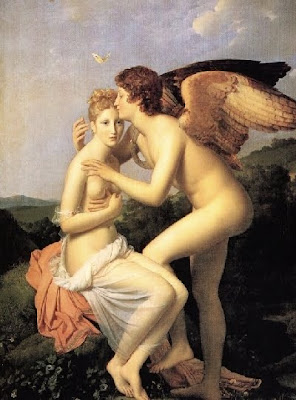 Well, Valentine's Day is a few days away...this coming Sunday and romance is in the air. So is some science and the powers of chocolate.

Here is a video with a Valentine theme.

Chocolate...pleasing to the palate and maybe an aphrodisiac.

"Relationships 101: Is chocolate an aphrodisiac?"

Examiner.com
The name aphrodisiac comes from Aphrodite, the Greek goddess of love and sensuality. An aphrodisiac is defined as something (like a drug or food) that arouses or intensifies sexual desire. In other words, aphrodisiacs are considered the ultimate potion of love.

For centuries, civilizations across the world have claimed to have found the secret to enhanced sexual desire – oftentimes found within the animal and plant life in their own backyards. Common aphrodisiacs that are still used today are oysters, Spanish Fly, ginseng and chocolate. There has been much scientific speculation as to the validity of these love potion claims, with chocolate being one of the most studied aphrodisiac of all.

Let’s take a look at some of the facts, fascinations and findings associated with chocolate:

- History: The Aztecs have been the first on record to associate the cocoa bean with sexual desire. The emperor Montezuma was said to consume the bean in copious amounts to fuel his romantic trysts, and strictly forbad women to consume it.

- Religion: In 1624 Johan Franciscus Rauch, a professor in Vienna, condemned chocolate as an inflamer of passions and urged monks not to drink it as he wanted to ban it in the monasteries.

- Fun Fact: The melting point of chocolate is slightly below human body temperature so it melts in your mouth. This makes the eating of chocolate a sensually enjoyable experience.

- Death: In the 17th Century, the first recorded case of “Death by Chocolate” occurred. In San Cristobal de las Casa, in Chiapas, Mexico, wealthy Spaniards were so addicted to chocolate that they refused a church dictated ban forbidding consumption of drink or food during Mass and chose to attend worship services in Convents instead. The Bishop of Chiapas who passed the edict, was found dead due to a mixture of poison that was secretly added to his daily cup of chocolate. Rumor has it that he passed from this world with a smile on his face.

- Marijuana Link: Chocolate contains pharmacologically active substances that have the same effect on the brain as marijuana, and that these chemicals may be responsible for certain drug-induced psychoses associated with chocolate craving. Because the amounts of these substances found in chocolate are so minuscule, eating chocolate will not get a person high; instead, there are compounds in chocolate that may be associated with the good feeling that chocolate consumption provides. (Neuroscience Institute in San Diego, California)

- Stress: Chocolate causes certain endocrine glands to secrete hormones that affect your feelings and behavior by making you happy. Therefore, it counteracts depression, in turn reducing the stress of depression. Your stress-free life helps you maintain a youthful disposition, both physically and mentally. So, eat lots of chocolate! (Elaine Sherman, Book of Divine Indulgences)

- Chemistry: Chocolate is a very complex food and scientists have investigated it thoroughly in order to unlock its secrets. The aphrodisiac qualities of chocolate have been linked to two chemicals it contains. One, tryptophan, is a building block of serotonin, a brain chemical involved in sexual arousal. The other, phenylethylamine, a stimulant related to amphetamine, is released in the brain when people fall in love.

- Sexes: Women are more susceptible to the effects of Phenylethylamine and Seratonin than men. This illustrates why women tend to be chocoholics more than men.

- Studies: Most researchers believe that the amounts of these chemicals in chocolate are too small to have any measurable effect on desire. Studies that have looked for a direct link between chocolate consumption and heightened sexual arousal have found none.

Conclusion: Despite scientific difficulty in proving chocolate an aphrodisiac, it does contain substances that increase energy, stamina, and feelings of well being. The reality is that chocolate makes you feel good and induces feelings of being in love. Everyone appreciates receiving a gift of chocolate because it makes you feel loved. Perhaps the historic euphemism associated with chocolate is what really provokes people to feel it is an aphrodisiac.