Oscar and the shadow of DEATH 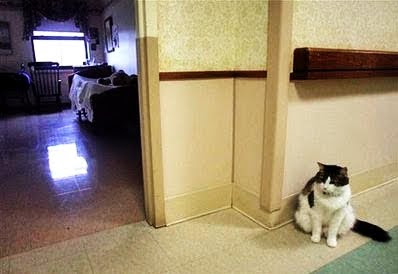 Who knows what is happening. We do have a symbiotic relationship with our pets--sometimes a better relationship than with humans. It may be that metaphysics can comprehend such things more than common physics. [However, I am suspicious of Oxford who presented me this morning with a pen and document (last will and testament) that in essence relinquished all my worldly goods to him and his co-conspirator uncle Tim.]

"Doctor casts new light on cat that can predict death"
When doctors and staff realized that a cat living in a U.S. nursing home could sense when someone was going to die, the feline, Oscar, was portrayed as a furry grim reaper or four-legged angel of death.

But Dr. David Dosa, who broke the news of Oscar's abilities in a paper in the New England Journal of Medicine in 2007, said he never intended to make Oscar sound creepy or his arrival at a bedside to be viewed negatively.

Dosa said he hopes his newly released book, "Making Rounds With Oscar: The Extraordinary Gift of an Ordinary Cat" will put the cat in a more favorable light as well as providing a book to help people whose loved ones are terminally ill.

"After the New England Journal article you got the feeling that if Oscar is in your bed then you are dead, but you did not really see what is going on for these family members," said Dosa, an assistant professor of medicine at Brown University.

"I wanted to write a book that would go beyond Oscar's peculiarities, to tell why he is important to family members and caregivers who have been with him at the end of a life."
Dosa said Oscar's story is fascinating on many levels.

Oscar was adopted as a kitten from an animal shelter to be raised as a therapy cat at the Steere House Nursing and Rehabilitation Center in Providence, Rhode Island, which cares for people with severe dementia and in the final stages of various illnesses.

When Oscar was about six months old the staff noticed that he would curl up to sleep with patients who were about to die.

So far he has accurately predicted about 50 deaths.

Dosa recounts one instance when staff were convinced of the imminent death of one patient but Oscar refused to sit with that person, choosing instead to be on the bed of another patient down the hallway. Oscar proved to be right. The person he sat with died first, taking staff on the ward by surprise.

Dosa said there is no scientific evidence to explain Oscar's abilities, but he thinks the cat might be responding to a pheromone or smell that humans simply don't recognize.

Dosa said his main interest was not to delve further into Oscar's abilities but to use Oscar as a vehicle to tell about terminal illness, which is his main area of work.

"Perhaps the book is a little more approachable because there is a cat in it. We really know so little about nursing homes, and this tries to get rid of this myth that they are horrid factories where people go to die."

Dosa said the story of Oscar, who is now nearly five years old, initially had sparked a bit more interest in families wanting to send their loved ones to Steere House.

Oscar has even been thanked by families in obituaries for providing some comfort in the final hours of life.

But he said Oscar remains unchanged by the attention, spending most of his days staring out of a window, although he has become a bit friendlier.

"The first time I met Oscar he bit me. We have warmed over the years. We have moved into a better place," said Dosa.

"I don't think Oscar is that unique, but he is in a unique environment. Animals are remarkable in their ability to see things we don't, be it the dog that sniffs out cancer or the fish that predicts earthquakes. Animals know when they are needed." 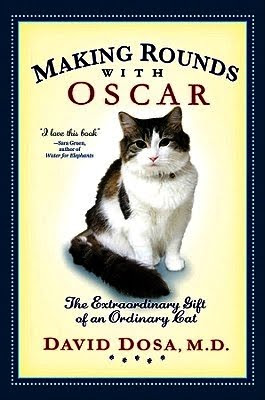 Making Rounds With Oscar: The Extraordinary Gift of an Ordinary Cat