College education isn't for all 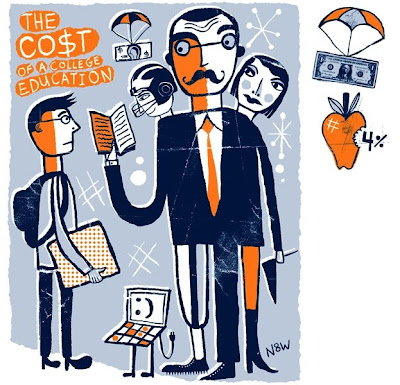 "The Case Against College Education"

Time
Even in these days of partisan rancor, there is a bipartisan consensus on the high value of postsecondary education. That more people should go to college is usually taken as a given. In his State of the Union address last month, President Obama echoed the words of countless high school guidance counselors around the country: "In this economy, a high school diploma no longer guarantees a good job." Virginia Governor Bob McDonnell, who gave the Republican response, concurred: "All Americans agree that a young person needs a world-class education to compete in the global economy."

The statistics seem to bear him out. People with college degrees make a lot more than people without them, and that difference has been growing. But does that mean that we should help more kids go to college — or that we should make it easier for people who didn't go to college to make a living?

We may be close to maxing out on the first strategy. Our high college drop-out rate — 40% of kids who enroll in college don't get a degree within six years — may be a sign that we're trying to push too many people who aren't suited for college to enroll. It has been estimated that, in 2007, most people in their 20s who had college degrees were not in jobs that required them: another sign that we are pushing kids into college who will not get much out of it but debt.

The benefits of putting more people in college are also oversold. Part of the college wage premium is an illusion. People who go to college are, on average, smarter than people who don't. In an economy that increasingly rewards intelligence, you'd expect college grads to pull ahead of the pack even if their diplomas signified nothing but their smarts. College must make many students more productive workers. But at least some of the apparent value of a college degree, and maybe a lot of it, reflects the fact that employers can use it as a rough measure of job applicants' intelligence and willingness to work hard.

We could probably increase the number of high school seniors who are ready to go to college — and likely to make it to graduation — if we made the K-12 system more academically rigorous. But let's face it: college isn't for everyone, especially if it takes the form of four years of going to classes on a campus.

To talk about college this way may sound élitist. It may even sound philistine, since the purpose of a liberal-arts education is to produce well-rounded citizens rather than productive workers. But perhaps it is more foolishly élitist to think that going to school until age 22 is necessary to being well-rounded, or to tell millions of kids that their future depends on performing a task that only a minority of them can actually accomplish.

The good news is that there have never been more alternatives to the traditional college. Some of these will no doubt be discussed by a panel of education experts on Feb. 26 at the National Press Club, a debate that will be aired on PBS. Online learning is more flexible and affordable than the brick-and-mortar model of higher education. Certification tests could be developed so that in many occupations employers could get more useful knowledge about a job applicant than whether he has a degree. Career and technical education could be expanded at a fraction of the cost of college subsidies. Occupational licensure rules could be relaxed to create opportunities for people without formal education.

It is absurd that people have to get college degrees to be considered for good jobs in hotel management or accounting — or journalism. It is inefficient, both because it wastes a lot of money and because it locks people who would have done good work out of some jobs. The tight connection between college degrees and economic success may be a nearly unquestioned part of our social order. Future generations may look back and shudder at the cruelty of it.

Use the blog's search engine for many more related articles. Use key words like "higher education" "college", etc.
Posted by Mercury at 6:08 PM