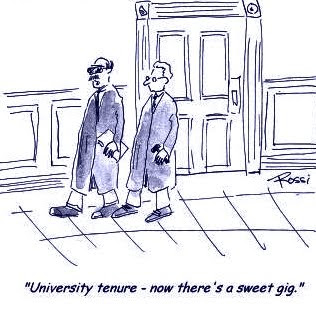 Houston Chronicle
Last week Amy Bishop, a member of the biology department at the University of Alabama at Huntsville, was charged with the fatal shooting of three colleagues. I learned the news just after I had finished teaching Niccolo Machiavelli's The Prince in one of my classes.

While the causes of the shooting remain vague, according to several sources, Bishop had been denied tenure. As a result, ballots seem to have been swapped for bullets and real blood for bad blood. We have since learned Bishop is a deeply troubled individual. But the event also points to the troubled state of the academy and tenure system — a state on which Machiavelli may cast light.

Tenure: Why or why not?

The reasons for keeping tenure are well known. It represents the institutionalization of professional excellence, promotes the cultivation of independent thought and encourages the pursuit of questions wherever they may lead. The reasons for dismantling tenure are equally well known. It leads to the institutionalization of mediocrity, helps the cultivation of groupthink and can lead to the exclusive pursuit of job security and professional sinecure. The dream of tenure inspires professional and personal integrity; the nightmare of tenure encourages the undermining of professional and personal integrity.

For those of us inside the academy, tenure has always been our way of life. Though less than half a century old in its current form — the establishment of tenure was one of the unforeseen consequences of the post-World War II baby boom, just as were the generous contracts showered on assembly-line workers in Detroit — we cannot conceive of our lives without it. It is to our professional world what gravity is to the physical world. And this despite the growing number of colleagues — adjuncts, postdocs, visiting lecturers, clinical faculty — whose professional orbits are far less regular than ours. They are like distant moons or asteroid showers — or, better yet, the dark matter that reminds us that the older physics no longer obtains.

Enter Machiavelli. Reborn in the Renaissance, the story goes, were the ideals of antiquity: civic pride, intellectual integrity, the cultivation of reason and pursuit of individual excellence. Secular and religious ideals were identical: Generosity and goodness, truth and love prevailed in both realms, and the Christian prince was the age's ideal.

For Machiavelli, this was less an ideal than an oxymoron. The successful ruler — one who benefits not just himself but his people — can no more follow Christian values than, say, a successful shark. In a world where men are feckless and fickle, restless and rapacious, a ruler who lived by the rules of the Sermon on the Mount would not live very long.

Based on his bleak view of humankind, Machiavelli draws his most fundamental lesson: “If one considers everything well, one will find something appears to be virtue, which if pursued would be one's ruin, and something else appears to be vice, which if pursued results in one's security and well-being.” In short, give one's fellow beings not just bread and circuses — or, when necessary, battles and executions — but, more important, give them appearances: the appearance of virtue, the appearance of goodness, the appearance of charity. Reality — or what passes for it in Machiavelli's scheme of things — will then take care of itself.

What has this to do with tenure and the American academy? Quite a bit, if one reads a short guide to getting tenure I recently discovered. Written by a professor of computer science at the University of Texas at San Antonio — not a department where The Prince ranks high in the curriculum — he nevertheless sounds thoroughly Machiavellian. According to the guide, most everything is appearance: One must seem to be the colleague sought after by senior faculty. “Be cautious about what you do, all the while seeming to be open,” he advises. It does not matter if you have an excellent research program. What matters, instead, are the perceptions of those who decide your fate: “You must not appear to be following a strategy to increase your tenure chances.” So, too, for your relationship with students: “Your teaching must be perceived as good.” So, too, must your integrity: “Make students think you are fair.” Otherwise, disaster lurks: “If students perceive you as unfair, they may generate serious complaints.” What should one do? Rather than level with the student, “listen carefully and attentively to his complaints, and then try throwing him a few points.” The “master of getting tenure,” the author concludes, “will appear principled to one group of faculty and will appear flexible to another group.”

We do not know what took place in the biology department at UAHuntsville. And we do know that psychodramas are not unique to research universities: “going academic” will not displace “going postal” anytime soon. Given our national romance with guns, friction in any American workplace could easily combust into bloodshed and death.

But events in Huntsville also reflect a kind of fatal combustion peculiar to the academy. We can easily dismiss the advice of Machiavelli as glib or cynical. But what Machiavelli calls the effectual truth of things nevertheless applies to our small world. Henry Kissinger was wrong when he said university politics is so venomous because the stakes are so small. On the contrary, the stakes are great — as great as our sense of dignity and self-worth. In the hothouse of tenure, who among us has not experienced the subtle but powerful pressures to stifle certain scholarly ideals because senior faculty would disapprove? Or recalibrate our ideas, much less our ideals, when they were found wanting in the balance with job security? Or, for that matter, been immune to the intellectual smugness that accompanies tenure?

Machiavelli famously wrote that there is “such a difference between the way we really live and the way we ought to live that the man who neglects the real to study the ideal will learn how to accomplish his ruin, not his salvation.” Substitute “tenure” for “salvation” and suddenly Huntsville, Ala., seems much closer to Florence, Italy.

[Zaretsky is professor of French history in the University of Houston Honors College and author most recently of Albert Camus: Elements of a Life.]

Tenured professorships--University of Alabama
Posted by Mercury at 7:54 AM