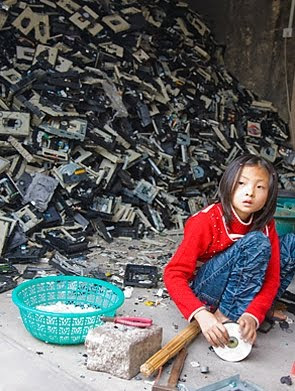 Urgent action is needed to tackle the "mountains" of e-waste building up in developing nations, says a UN report.

BBC NEWS
Huge amounts of old computers and discarded electronic goods are piling up in countries such as China, India and some Africa nations, it said.

Unless dealt with properly the waste could cause environmental damage and threaten public health, it said.

The report gathered information about current levels of e-waste in 11 nations and also looked at how those totals might grow in the next decade.

Globally, e-waste is growing at a rate of about 40 million tonnes per year as consumers, in both developed and developing nations, buy new gadgets and discard their old ones.

Many of the older items end up in developing nations. By 2020, China and South Africa could see e-waste generated by old computers rise by 400% by 2007 levels.

Some nations are happy to take in e-waste to use in order to extract some of the precious materials and metals that go into making modern consumer electronics.

For instance, said the report, in an average year global production of mobile phones and computers uses 3% of the silver and gold mined, 13% of the palladium and 15% of the cobalt.

However, it found, in some places efforts to extract these metals are inefficient and do not do enough to handle the hazardous materials recovery produces.

For instance, it said, e-waste treatment in China typically involved back yard incinerators which were a wasteful and polluting way to recover precious materials.

"China is not alone in facing a serious challenge," said Achim Steiner, executive director of the UN Environmental Programme (UNEP) which issued the report. "India, Brazil, Mexico and others may also face rising environmental damage and health problems if e-waste recycling is left to the vagaries of the informal sector."

The report said Bangalore in India was a good example of how local initiatives could reform the gathering and treatment of e-waste.

It urged nations such as Brazil, Colombia, Mexico, Morocco and South Africa to set up state-of-the-art e-waste treatment centres now, while the amounts they produced were relatively small.

"One person's waste can be another's raw material," said Konrad Osterwalder, rector of the UN University. "The challenge of dealing with e-waste represents an important step in the transition to a green economy."

Study suggests the increased dumping of used computers, mobile phones and other electronic equipment poses a serious threat to health and the environment

guardian.co.uk
The world must do more to cope with the drastic rise in electronic waste, according to a UN study published today.

The report suggests that in some countries, the amount of e-waste being produced – including mobile phones and computers – could rise by as much as 500% over the next decade. Such rapid growth, it argues, will create intractable problems for people's health and the environment as the waste, much of it containing toxic material, decays.

"The issue is exploding," said Ruediger Kuehr, who oversees zero-emission initiatives at the United Nations University. "We see the hunger for mobile phones, computers and also any other kind of electronic and electrical equipment in some developing countries."

The findings are being unveiled at a meeting of the UN Environment Programme (Unep) in Bali today, along with a call for greater efforts to fix the problem.

"This is a global question," said Guido Sonnemann, programme officer for Unep. "This problem is not going away, it's growing."

While many of the materials used in electronic equipment can be reused in new products, recycling capacity is being outstripped by the growth in demand for phones, computers and other devices.

Despite a number of conventions aimed at preventing the indiscriminate dumping of e-waste, the problem is snowballing, with billions of people now regularly using advanced electronics.

The problem is particularly acute in parts of west Africa, where ship-loads of e-waste are dumped on a daily basis and scavenged by children who break down the electronics to recover valuable metals that they can sell.

Kuehr said the issue was vitally important for countries where economic growth is highest and dumping most prevalent.

The problem is not confined to developing countries, however.

"There's still a high growth rate in developed countries," said Kuehr. "It's an increasing, growing and pressing problem everywhere, including Europe. The collection rates are simply too little."

Although there is legislation to encourage e-waste recycling in some parts of the world – including the WEEE initiative in Europe – the UN argues that this alone is insufficient.

Instead, it advocates a number of solutions, including supporting local communities to increase the amount of "informal" recycling, where valuable materials are scavenged for resale and reuse.

It also wants better enforcement of recycling and anti-dumping laws and greater action from manufacturers, and is urging local governments and consumers to recycle old technology rather than dump it.

"We see the need for stronger awareness and action to solve the e-waste problem," said Sonnemann. "You need to get a process that is not harming health or the environment."

Junk televisions and recycling
Posted by Mercury at 5:26 PM