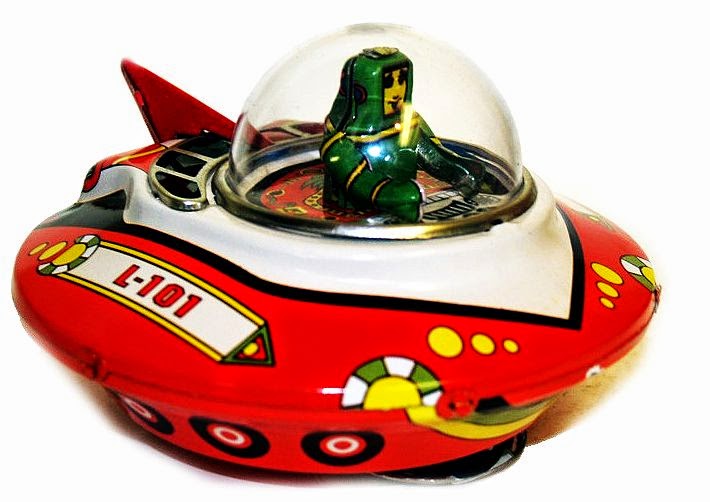 "The Man Who Introduced the World to Flying Saucers"

Kenneth Arnold saw something, said something, and ushered in the UFO-industrial complex.


The plan was to launch a flying saucer. NASA's supersonic braking device—technically known as the Low-Density Supersonic Decelerator, less technically an enormous inflatable disk—was designed to deliver heavy payloads to the surface of Mars. Payloads, the thinking went, that could include humans. The experimental craft was meant to launch last week; this weekend, that launch was postponed because of a very earthly impediment: uncooperative winds.

That the LDSD would be so subject to environmental vagaries explains in large part why its broader category of craft—the flying saucer—has figured relatively rarely in NASA's engineering repertoire. So what, then, accounts for their ubiquity—in our imagination, if not in our airspace? Why are the spaceships of Star Trek and Star Wars and Independence Day shaped the way they are?

Why, if saucers are relatively rare in science, have they been such a long-standing element of science fiction?

If you wanted to put a precise date on the origins of our obsession with saucers, the most-cited contender is June 24, 1947. That was the day that Kenneth Arnold, an amateur pilot from Idaho, was flying his little plane, a CallAir A-2, over Mineral, Washington. The skies were clear; there was a light breeze. Arnold, who was en route to an air show in Oregon, was doing a little exploring on the side, near Mount Rainer: A Marine Corps C-46 transport airplane had gone down in the area recently, and there was a $5,000 reward for the person who found the wreckage.

Suddenly, as Arnold would later recall, he saw a bright light—just a flash, like a glint of sun as it hits a mirror when the glass is angled just so. It had a blue-ish tinge. At first, he thought the light must have been coming from another plane; when he looked around, though, all he could see was a DC-4. It seemed to be flying about 15 miles away from him. It was not flashing.

And then the lights came again—this time, in a series. Nine flashes, in rapid succession.

What did Arnold see that day? Or, more to the point, what would he say that he’d seen? As Ted Bloecher writes in his Report on the UFO Wave of 1947, released in 1967, Arnold would later describe the airborne objects as flying in "a diagonally stepped-down, echelon formation," the entire assemblage "stretched out over a distance that he later calculated to be five miles." The objects seemed to be flying on a single, horizontal plane, but they also weaved from side to side, occasionally flipping and banking—darting around, Arnold would say, like “the tail of a Chinese kite.” They moved in unison, Arnold said. They didn't seem to be piloted, he said. Once Arnold realized the objects were not, in fact, commercial jets—or, as he’d also thought for a moment, a skein of geese—he figured he was witnessing the testing of military aircraft.

If so, though, the objects would be very advanced aircraft. Arnold, still trying to figure out what he was looking at as he flew over Mount Rainier, decided to focus on the vehicles’ speed. He calculated the time it took the objects to travel between Mount Rainer and Mount Adams, a distance of about 50 miles: a minute and 42 seconds. Which was a rough approximation—but which would also mean that the objects were traveling at a rate, rough-approximation-wise, of 1,700 miles per hour. Which would mean that they were traveling around three times faster than any aircraft was capable of at the time. The formation of flying objects was flying, actually, more than twice the speed of sound. Chuck Yaeger wouldn’t make his supersonic flight—the one generally acknowledged to be the first—until later that year, in October.

Arnold wasn’t sure what he’d seen; the flying objects he’d go on to describe remained, in the most literal sense, unidentified. What he did know was that the sighting gave him, he would later say, an "eerie feeling.”

An hour later—around 4 p.m. local time—Arnold landed his plane at the air strip in Yakima, Washington. He was a frequent visitor there, and told the staff, friends of his, about the strange objects he'd seen. The story, as you’d expect, spread quickly throughout the small-town airfield. And then, Arnold went about his planned trip: Refueling, he proceeded on to an air show in Pendleton, Oregon. What he didn’t know, however, was that, after he left, one of the guys from Yakima had called someone in Pendleton, spreading the news of the sighting outside of Washington.

And then reporters, as reporters are apt to do, got wind of the story. On June 25, Arnold ended up at the offices of the East Oregonian, a Pendleton newspaper. He told reporters about his sighting. He emphasized the “unidentified” as much as the “flying objects.” He described their movements, saying that they flew “like a saucer if you skip it across the water.”

The reporters seem to have believed him. As the historian Mike Dash explains,

Arnold had the makings of a reliable witness. He was a respected businessman and experienced pilot ... and seemed to be neither exaggerating what he had seen, nor adding sensational details to his report. He also gave the impression of being a careful observer.... These details impressed the newspapermen who interviewed him and lent credibility to his report.


But what happened next—the precise manner in which flying saucers, as a concept, transferred from the mind of Kenneth Arnold to that of the nation—remains unclear. We know that Arnold had mentioned saucers in his discussions with reporters; but was he being literal, or metaphorical? Stories of the time credit Arnold with using the terms "saucer," "disk," and "pie-pan" in his description of the objects he'd seen.

Arnold himself, however, would say that he was misquoted—or, at least, taken out of context. Some argue that the entire idea of a flying saucer was based on a reporter's misunderstanding of Arnold's "like a saucer" description as describing a saucer itself—making it "one of the most significant reporter misquotes in history." A 1970 study reviewing U.S. newspaper accounts of the Arnold UFO sighting concluded that the term had been introduced by an editor or headline writer, since the bodies of the early Arnold news stories didn't mention "flying saucers" or "flying discs."

Arnold would corroborate this. In a 1950 interview with Edward R. Murrow, he discussed the interviews he'd given to military intelligence officers about what he'd seen. Murrow noted that the officials had doubted the accuracy of some of Arnold's descriptions of that sighting; Arnold blamed some of that on the media.

MURROW: On three different occasions, Mr. Arnold was questioned by military intelligence. They expressed doubt as to the accuracy of some of his reported observations.

ARNOLD: That's right. Now of course some of the reports they did take from newspapers which did not quote me properly. Now, when I told the press, they misquoted me, and in the excitement of it all, one newspaper and another on got it as ensnarled up that nobody knew just exactly what they were talking about, I guess.

MURROW: Here's how the name "flying saucer" was born.

Was it a "historical misquote," or the second thoughts of reluctant source? (Just after the sighting, on June 27, Arnold would tell reporters that "I haven't had a moment of peace since I first told the story.") More than a half century later, it's even more difficult than it was back then to determine the lines between phantom and fact. The first draft of history can be a rough one.

Earth vs. the Flying Saucers

What is clear, in retrospect, is that, starting on June 26, the flying saucer—as an idea, if not an object—was introduced to Americans. Newspapers began using the terms "flying saucer" and "flying disk" (occasionally: "flying disc") to describe the objects Arnold had seen. And the concept spread; once the idea had been planted in people’s minds, they, too, began seeing saucers. Or, perhaps: “seeing” them. On July 4, a United Airlines crew reported seeing another collection of nine disk-like objects in the skies over Idaho. Bloecher, in his 1967 paper, collected reports of 853 flying disc sightings in 1947 alone—gathered from 140 newspapers from nearly every U.S. state and Canada. “After the reports,” the Houston Chronicle recently noted, “people everywhere were scanning the skies for flying the saucers. And when enough people look for something, some people will think they see something. Reports of flying saucers started coming in from all over.”

Will Smith may not have been born in 1947; nonetheless, that year, the Will Smith effect was alive and well.

And it would remain vital in the years to come. Over the next decade, flying saucers would become a ubiquitous feature of popular culture, starring—with tones of both wonder and fear—in comic books and TV shows and movies. There was 1950’s The Flying Saucer. And Flying Disc Man from Mars. 1956 brought Earth vs. the Flying Saucers. And 1957 brought Invasion of the Saucer-Men.

The concept was born into a culture, some have argued, that was primed for the obsession. June 24, 1947 marked not merely the origin of the flying saucer; it also, in some sense, marked the beginning of the ET-industrial complex. “At that time there was still some thought that Mars or perhaps Venus might have a habitable surface,” Robert Sheaffer, an author of UFO-related books, told the blog Life’s Little Mysteries. “People thought these UFOs were Martians who had come to keep an eye on us now that we had nuclear weapons.”

Arnold himself, who at first emphasized that he figured the objects were military vehicles, would become one of those people. Speaking with Murrow for that 1950 broadcast, the pilot discussed the fact that, as he told it, he had had three more sightings of nine mysterious spacecraft. Murrow asked him what he made of those sighings. Arnold replied:

I more or less have reserved an opinion as to what I think. Naturally, being a natural-born American, if it's not made by our science or our Army Air Forces, I am inclined to believe it's of an extra-terrestrial origin.


Others, of course, were inclined to believe the same. On July 8, 1947—two weeks after the world was introduced to the concept of the "flying saucer"—Roger Ramey, the Commanding General of the Eighth Air Force, issued a statement informing the public that the personnel on an Army airfield in New Mexico had recovered the wreckage of an experimental military weather balloon that had crashed in the area. He released that statement because another press release had gone out earlier that day: one informing the world that personnel from the field's 509th Operations Group had recovered a craft that had crashed on a ranch in the area.

The ranch was in Roswell. And the object that had crashed was not a weather balloon, that first statement had said, but a "flying disk."