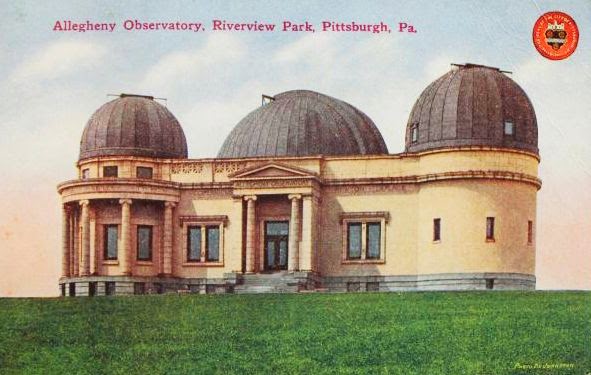 This spring I had the pleasure of working with a group of six students from the University of Pittsburgh’s History of Art and Architecture Department as they participated in a unique opportunity to intensively study the historic Allegheny Observatory and to interact directly with a project funded by a PHMC Keystone Historic Preservation Grant.

For anyone unfamiliar with the Allegheny Observatory, it is a major astronomical research facility owned by the University of Pittsburgh. The Observatory is located in Riverview Park on Pittsburgh’s Northside, four miles north of Downtown, and approximately seven miles northwest of the University’s main campus in Oakland. Swedish-born architect Thorsten E. Billquist designed the Neoclassical building after winning a design competition in 1896. The building features a rusticated sandstone foundation, buff brick walls, terra cotta ornamentation and three telescope domes. It was listed in the National Register of Historic Places in 1979 and is significant for accomplishments in the field of astrometry, the branch of astronomy that involves precise measurements of the positions and movements of stars and other celestial bodies.

Billquist studied architecture at the Technological Institute of Gothenburg, Sweden before coming to the United States in 1887. He worked in the New York and Boston offices of McKim, Mead & White for five years, and is believed to have worked on their Boston Public Library project. In 1893 he moved to Pittsburgh, where he worked with Longfellow, Alden and Harlow and then with W. Ross Proctor, an early graduate of Columbia University’s Beaux Arts-derived curriculum. He then established his own practice, spurred in part by obtaining the Observatory commission. Billquist worked closely on the design of the building with F.L.O. Wadsworth (Director of the Observatory from 1899 to 1906) and later with Edward B. Lee, who had studied at the Ecole des Beaux Arts and who would become Billquist’s partner from 1905 to 1909. Construction began in 1900 and astronomers were working in the building by 1902. However, the formal dedication did not occur until 1912 due to funding delays for acquiring all of the desired research equipment.

The Billquist-designed Observatory replaced a smaller, single-domed predecessor located about two miles from Downtown Pittsburgh, in what was then Allegheny City. Designed by architects Barr and Moser, the original Observatory was completed in 1861 and became part of the Western University of Pennsylvania (forerunner to the University of Pittsburgh) in 1867. It was here that eminent astronomers Samuel Pierpont Langley, James Edward Keeler and John Alfred Brashear established the Allegheny Observatory as one of the pre-eminent observatories in the world. By the close of the nineteenth century, however, interference from city lights and pollution necessitated the move to a site further from the city.

The students who studied the Observatory this spring were members of HAA1921: Documentation and Conservation Studio, a six-credit fieldwork course that I teach as part of Pitt’s Architectural Studies Program. The capstone of the program’s undergraduate Historic Preservation Track, the course is offered each spring and is designed to mirror the experience of working on a significant, real world preservation project—the students were preservation planners, I was their project manager, and guest speakers served as expert consultants. The ultimate deliverable was creation of a professionally researched and written historic structure report that contains useful information for their client—in this case, the University’s Facilities Management Department and the Department of Physics and Astronomy. Looking back on the semester, sophomore Jacob Craig acknowledged that the design of the course worked well for him: “The hands-on applications and real-world scenarios gave value and integrity to the learning experience. Actually performing the lessons and attaining their objectives reinforced concepts. Teaching out of a book limits a student’s retention, motivation and interest.”

The course, which was first offered in 2008, has previously studied the Mellon Hall of Science at Duquesne University (designed by Mies van der Rohe) and the Waldorf School of Pittsburgh (formerly the Ursuline Young Ladies Academy). For the latter, students developed a historic structure report the first year while their colleagues wrote the initial draft of a National Register nomination the next year.

A fortunate constellation of events led to the Allegheny Observatory becoming the fieldwork site this past semester. First, the University of Pittsburgh was awarded a Keystone Historic Preservation Project Grant in 2013 to complete the architectural and engineering documentation for remaining phases of a master plan to restore the exterior of the Observatory. Second, the University selected the architecture and preservation firm of Pfaffmann + Associates (P+A)—where I work—to complete the project. And, third, after two years of studying Mies, Modernism and Mellon Hall, it was time to identify the next site for the course.

As both the preservation project manager for the Keystone Grant and the instructor of HAA1921, I immediately saw the opportunity for a unique learning experience. I could offer the students considerable knowledge of the building (P+A had successfully implemented two previous Keystone Grants at the Observatory to restore the main entrance pediment and the colonnade of one of the building’s three domes); and I could coordinate the work of various consultants so that they could interact with the students as their professional investigation of the building progressed. The pedagogical value was quickly endorsed by Observatory staff; Drew Armstrong, head of the Architectural Studies Program; and by the Office of the Dean of the Dietrich School of Arts and Sciences, which provided transportation for the students from Oakland to the Observatory.

Class started the first week in January with a tour by the Observatory’s Electronics Technician, Lou Coban, the first of ten guest consultants who would help the class better understand the Observatory and the process of assessing its significance and preservation issues. The record cold temperatures that Pittsburgh was experiencing quickly reinforced an important consideration about the design and care of an observatory—the air temperature within the rooms housing each telescope must be as close as possible to that of the outside air in order to minimize viewing distortion from differential heat currents (think of the waves emanating from asphalt on a hot summer day). Lou was, thankfully, very efficient that night as everyone hurriedly took notes in the sub-freezing spaces beneath the domes!

Subsequent experts who met with the class included the following:

John Schneider, structural engineer, helped the class understand how the Observatory was constructed and how to read historic framing plans. He also reported on exploratory work under the Keystone grant project to investigate two areas where brick is deteriorating and bowing.

Miriam Meislick and David Grinnell, University archivists, explained how to navigate an archive and shared historic photographs, maps and other materials—including the Observatory’s original building permit. Their guidance also led to documents that revealed the names of the building’s contractors.

Bill Callahan, PHMC’s very own community preservation coordinator in western Pennsylvania for the Bureau for Historic Preservation, explained what a state historic preservation office does and provided a contextual framework from which to better understand the Keystone Grant.

Mick Nardozzi and Tony DeChellis, cost estimator and mason, respectively, explained how the sandstone, brick and terra cotta were created and provided an overview of the previous restoration projects at the Observatory.

Kirk Weaver, stained glass restorer, outlined the proper care of the Observatory’s stained glass window, Urania, by artist Mary Elizabeth Tillinghast, who at one time had worked with Louis Comfort Tiffany and John LaFarge. In advance of this meeting, I conducted a workshop where the students explored basic stained glass methods firsthand, learning to cut glass and solder the pieces together using both lead cames and copper foil. Senior Wenfei Luo exclaimed “When we made stained glass pieces ourselves in class we had fun and could actually practice the techniques.”

Michael Belman, fine art conservator, explained how sculptor Frank Vittor likely created the life-size bronze of astronomer and lens maker John Brashear in the early 1920s and how best to care for this work of art that greets visitors as they enter the Observatory.

Ron Leibow, Senior Project Manager in the Facilities Management Department, shared a decade of experience working with the Observatory and provided an insightful introduction to the numerous professions, besides architecture, in which one can positively affect the built environment.

Lastly, Derek Wahila, graphic designer, offered guidance on the design of the final historic structure report and helped the students weigh the impacts of choosing particular layouts, fonts and other visual elements.

Commenting on the opportunity to interact with so many experts in their fields,Junior Sapata Pessiki concluded, “Bringing in consultants was a unique and extremely useful aspect of this class. It gave us access to so many different resources that we likely would never have known about.”

Interspersed between visits with these experts was a series of Foundational Assignments designed to introduce or further develop specific preservation skills and to parallel many of the activities that Pfaffmann + Associates was undertaking as part of the Keystone Grant project. Exercises included the identification of character-defining features;sketching and labeling the architectural elements of the front portico; benchmarking six other university-owned observatories to study common preservation problems and solutions; analyzing historic maps to identify changes to the building and neighborhood over time; documenting the building photographically; evaluating the condition of all windows and creating a window schedule; and assessing masonry problems façade-by-façade in order to understand causes and to propose solutions. “I found the hands-on conservation work to be interesting,” noted Senior Rachel Kauffman. “Working with materials such as stone, terra cotta and brick allowed the readings to have a far greater impact on our learning.”

Lastly, the output from these Foundational Assignments directly informed four assignments that led to creation of the final historic structure report. These included having each student complete the following: writing a physical description of a portion of the building, then working together to edit each description into a single, team-authored chapter; researching and writing a historic context paper to establish the significance of the Observatory; intensively investigating a character-defining feature and proposing a proper treatment plan in accordance with the Secretary of the Interior’s Standards; and working as a team to design, edit and print the final report. On the last evening of class, the students presented the results of their four-month investigation during an hour-long public presentation, which included a series of long-term recommendations. Senior Erin Candee was particularly excited about recommendations that went beyond bricks and mortar: “Because of this class, I learned what a fascinating building the Allegheny Observatory is and how overlooked it is by students. Different assignments allowed us to come up with different ways to build interest among the student body and to suggest future fund raising ideas.” The class concluded with students leading a question-and-answer session and tour of the building. 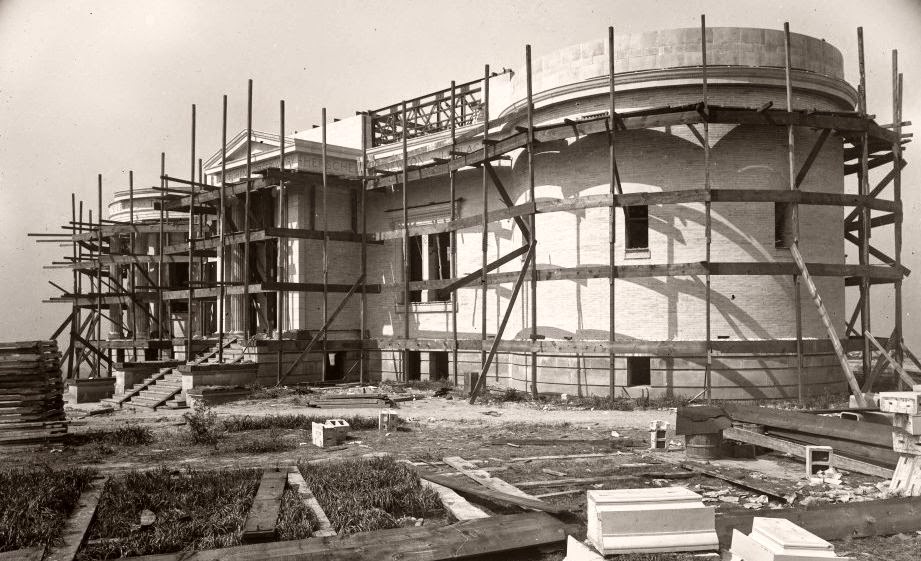 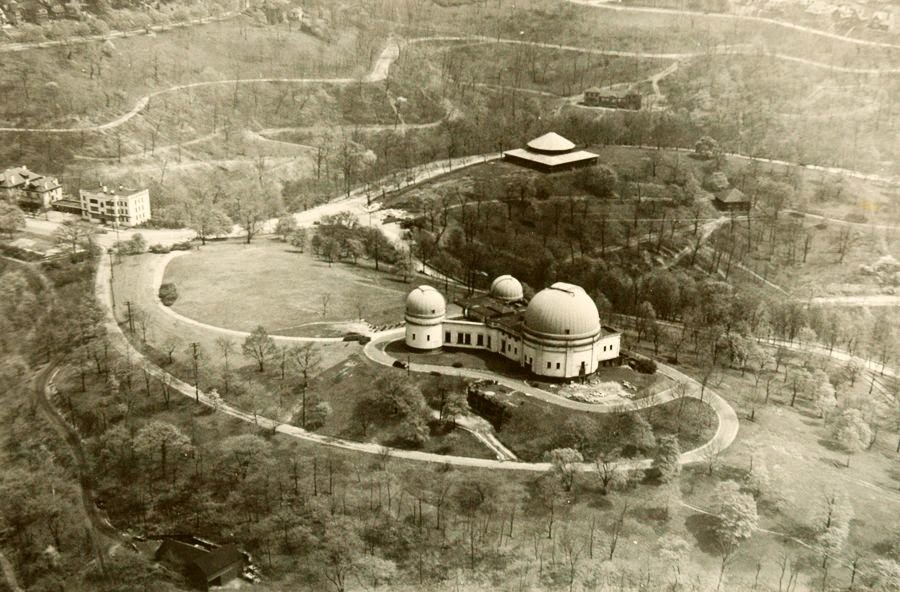 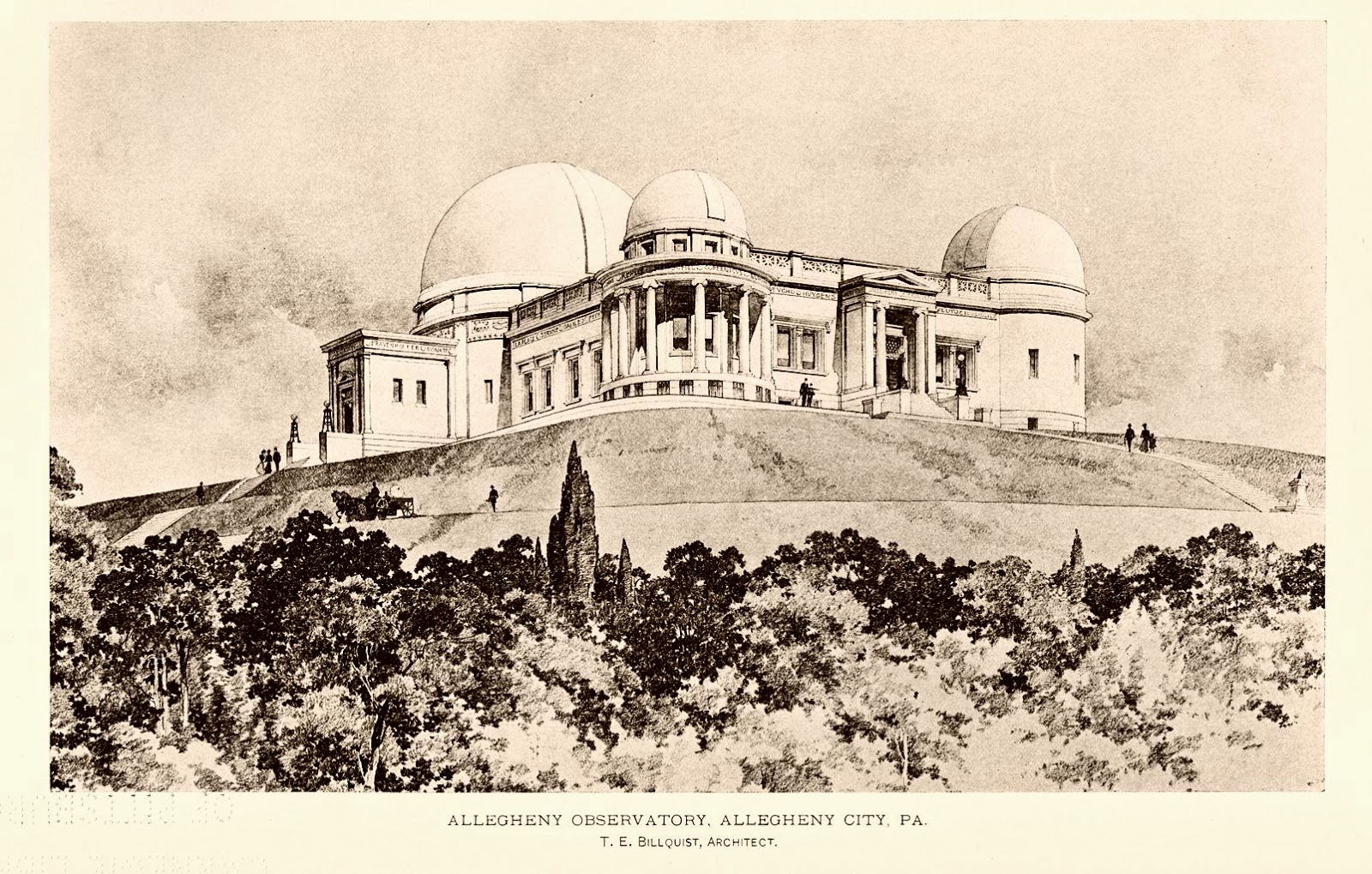 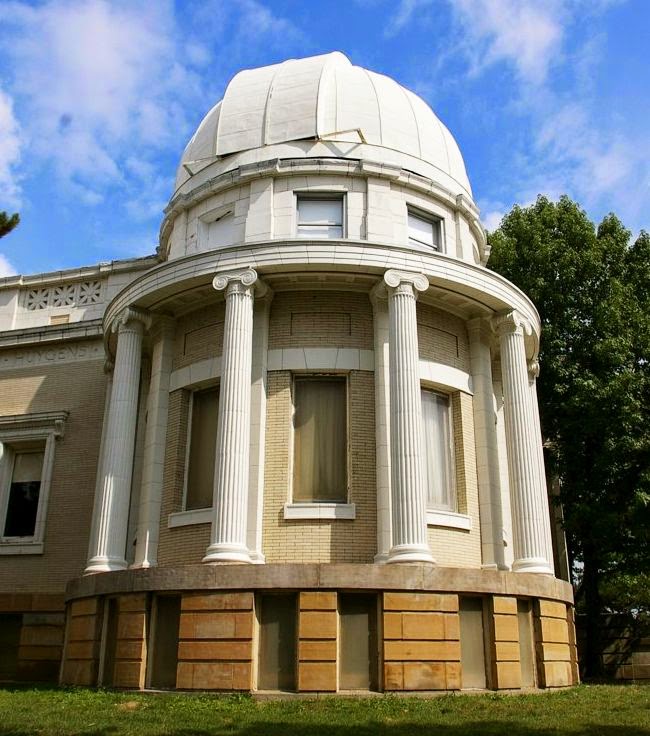