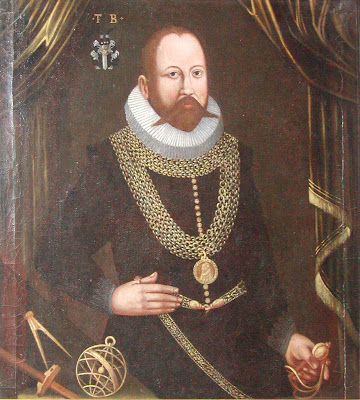 Goes to illustrate that science is a function of team work.

"A feisty man of science"

The Sydney Morning Herald
Tycho Brahe observed the sky before the age of telescopes.

MANY think of Tycho Brahe as the most significant astronomical observer before the invention of the telescope and well worthy of the prominent crater on the moon named after him. Yet, in the hours before his death on October 24, 1601, lying in the grip of a fever rending him delirious, Brahe reportedly said, ''May I not have lived in vain.''

Born in 1546 in Scania, then part of Denmark, to one of the highest-ranking noble families, he was raised by his paternal uncle. At university in 1560 he saw a solar eclipse, which piqued his interest in astronomy.

Not lacking confidence, he challenged another student to a sword duel over claims of who was the better mathematician. In the ensuing contest, Brahe lost part of the bridge of his nose and would then on wear a silver plate to cover the offending area; he reportedly wore a gold one to church.

His impressive scholarship reached the ears of King Frederick, who offered the island Ven on which to build an observatory and substantial funds to run such an institution. Estimates suggest 5 per cent of Denmark treasury funds were used in the venture - a staggering sum, underlying the ubiquitous faith placed in Brahe. He took possession of Ven in 1574 and built a castle and observatory he called ''Uraniborg'', or ''heavenly castle''. It was the last purpose-built astronomical observatory not to feature a telescope - its invention lying almost 30 years in the future.

Discovering most records of previous observations were not exacting enough, Brahe designed, manufactured and calibrated new instruments allowing unprecedented accuracy. Ven became a revered centre of learning and had as many as 100 assistants sourced from European universities. International scholars visited and he trained the next generation of astronomers. It even boasted its own press.

In 1572, he observed the second-last supernova to be seen in the Milky Way and five years later the comet of 1577. The accepted Ptolemaic model at that time featured the Earth at the centre of the universe, encircled by glass spheres supporting each of the orbiting moon, sun and planets and, lastly, the stars. The sphere of stars was thought unchanging and comets an atmospheric phenomenon.

The fact a supernova appeared where no star resided before refuted the earlier claim. Furthermore, highly accurate parallax measurements of the comet also indicated irrefutably to Brahe that the comet was way out of the Earth's atmosphere and further than the sphere of the moon.

As such, this required a rethink on the held model of the universe. He came up with an original concept that sat between the Ptolemaic and Copernican models. Brahe did away with the glass spheres and continued to hold Earth at the centre, with moon and sun orbiting it, but the rest of the planets orbiting the sun.

In 1597, after falling out of favour with new king Christian following Frederick's death, he left Denmark, packing up books, instruments and observations, eventually ending up in Prague as the Imperial Mathematician. This was incredibly significant, for in this new location his main assistant was Johannes Kepler, a mathematical genius.

Following Brahe's death in 1601, Kepler used the superb detail and accuracy of Brahe's collected observations to formulate his laws of planetary motion; without this trove of painstakingly collected data, astronomy may have not burst forth to the new age till much later.

Tycho Brahe [Wikipedia]
Posted by Mercury at 9:42 AM