So, there is some value in philosophy...that is comforting

"‘A Little History of Philosophy’ Is Engaging, Smart and Entertaining"

PopMatters Magazine
Philosophy has a reputation. Obscure, frustrating, unnecessary, dour, etc. The domain of a cliquish and bearded inner circle coolly fiddling with glass beads while the world around them burns. How else should we feel about a practice/therapy/lifestyle choice that people have been exploring for over 2,000 years that keeps rehashing the same basic problems as if no progress has been made?

It’s also a subject that reluctantly grants entry. Philosophy may not be a seamless evolution of ideas (or “a series of footnotes to Plato” as Whitehead wrote) but it is a cumulative build, and philosophers readily rely on other’s interpretations of monumental texts which may themselves be revisions or critiques to prior debates on still earlier unresolved arguments about why a stone rolls downhill. Point being: the layman (or otherwise) need not feel bad for reading up on the fundamentals.

And fortunately, there is plenty of help out there: Kolakowski’s Why is There Something Rather Than Nothing is a winner; Totem Books’ Introducing series of intellectual comic strips are deceptively rigorous; the Oxford University Press A Very Short Introduction books hit the mark more often than not; and Continuum’s Guides for the Perplexed, though more academic in tone, are comprehensive and rewarding.

Yale University Press is getting in on the act as well with their Little History series; the hook here is that these are books which investigate a towering subject in 40 breezy chapters with an eye for levity and access. Nigel Warburton (author of Thinking from A to Z, lecturer at Open University) has produced A Little History of Philosophy, the second book in what looks to be a promising series.

Warburton’s Little History willfully removes the subject’s obscurities and exclusivity and renews its importance, universality, and significance. In an interview the author expresses his wish to prove “that it’s possible to write an accessible and enjoyable book without betraying the spirit of the great thinkers of the past or making them obscure or irrelevant.” And he does. Spanning Socrates to Peter Singer, this fast-reading, chronologically structured volume relates concepts and biographical tidbits from our most important thinkers in a style marked by simple, jargon-free text and smooth lane changes from one topic to another.

As each philosopher is given only a couple of pages (or less, some share a chapter; Kant is the sole philosopher to receive two) Warburton must sacrifice depth for breadth. Each chapter begins with an observation or question, moves into a biographical sketch, sums up a main concept or two, and then segues into a new chapter of intellectual history. Using this formula, readers emerge from Plato’s cave, go off a cliff with Pyrrho, negotiate social contracts with Hobbes, have a history lesson from Hegel, and confront the banality of evil with Hannah Arendt, all at a rapid clip.

It’s interesting, too, that not all chapters are on philosophers proper—Freud, Marx, Darwin, and Turing all make appearances, widening the book’s scope to include paradigm-shifting ideas in politics, psychology, and science while enforcing the idea the philosophy is and has always been interdisciplinary and inclusive.

The sheer amount of ground covered in less than 250 pages is impressive. That Warburton finds a thread connecting philosophies both ancient and contemporary is more impressive still. As the author would have it, the subject’s essence involves “constantly challenging widely held assumptions.” Though the tone is kept light (Socrates is described as being “extremely annoying” and the Summa Theologica is “a very long book”) and the explanations are necessarily basic, even the most battle-scarred of adepts will likely enjoy the charm and ease of Warburton’s style.

So, yes, a trade-off is made. As this work raises a multitude of ideas instead of offering deep analysis and specific focus, Warburton is able to keep it engaging, smart, and even entertaining. Younger readers, especially, may find this to be a foundational collection. There will be plenty of time to melt your face on Phenomenology of Spirit later.

Warburton raises the enduring questions that have repeatedly challenged and inspired us. With this sweeping and enjoyable work the author affirms that deliberating on reality and questioning how our lives are best lived are still worth the trouble. 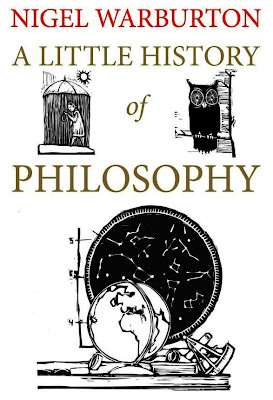 A Little History of Philosophy