New elements for the Periodic Table 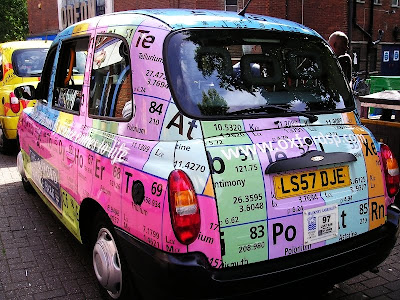 Time
You may have grown up thinking you knew what was what in science, back when Pluto was a planet, the opposite sex had cooties, and the last 10% of every beverage was known to be backwash. But things change, including the periodic table, which just made two new elements official.

Sadly, they don't have names yet, according to the AP. So for now, we'll just have to call them #114 and #116 (numbers which refer to the number of protons in their nuclei and which give them their unique boxes on the table). We know that they last for less than a second, and that "the new elements were made by slamming two lighter elements together in the hopes that they'd stick."

Elements are sometimes listed before they're voted into the table, as was the case with #114 and #116 before an international committee of scientists gave them the go-ahead, and as is currently the case with #113 and #115, who continue to languish in periodic table purgatory. The total number of officially recognized elements, a Carnegie Mellon professor told the AP, is now 114, given this condition. He also noted that over the last 250 years, elements have been added every two-and-a-half years on average. Which all goes to show, saying "It's science," might not be as definitive a statement of truth as you thought.

"Two new elements join the periodic table – but what should we call them?"

The addition of two new elements to the periodic table is causing excitement in scientific circles, but not half as much as the race to name them.

The Guardian
As names go, element 114 (the number that refers to the number of protons in its nucleus), or its "placeholder" name ununquadium are not particularly inspiring. The same goes for element 116, or ununhexium. But the good news is they won't be staying.

With the discovery of two new additions to the periodic table, announced this week, begins the hunt for two new names. The reported suggestions currently awaiting approval are flerovium, after the Soviet nuclear physicist Georgy Flyorov, and moscovium, after the Russian capital – the discoveries were made at the Joint Institute for Nuclear Research in Dubna, 100km north of Moscow, in collaboration with scientists from the Lawrence Livermore national laboratory in California.

Both of these names follow trends for naming elements, says Sam Kean, science writer and author of The Disappearing Spoon, his fascinating book about the periodic table. "It's trendy these days to name elements after great scientists," he says. "For better or worse, western cultures venerate individual geniuses, and while you can't say the periodic table has succumbed to modern celebrity culture, even something as seemingly timeless can't escape the fashions of its time." Others named in this tradition include the last element to be added to the table in 2009, copernicium, named after the astronomer Nicolaus Copernicus.

"The other trend," says Kean, "is naming elements after places, a sort of chemical patriotism." (Names, according to the International Union of Pure and Applied Chemistry, should end in "-ium" for "linguistic consistency".)

While the discovery of new elements is the result of years of complicated experiments – with only 92 naturally occurring elements, new heavy elements are produced synthetically by smashing the nuclei of atoms together – the bestowing of a name can be the final difficulty.

From the 60s to the end of the 90s, disputes over the right to name new elements regularly occurred between the University of California and the Dubna laboratory in the so-called Transfermium wars. "These latest elements were discovered by a collaboration between those two places," says Kean. "So while the periodic table was almost a proxy for the cold war before, now the relationship has thawed."

Use the blog's search engine to find more on the Periodic Table.
Posted by Mercury at 6:21 AM