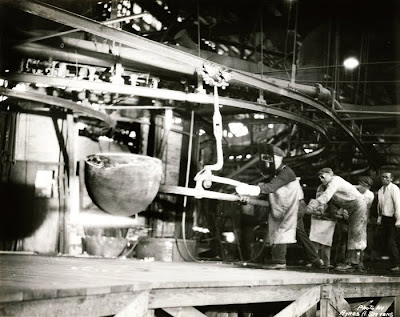 The 200-Inch Disk and the Hale Reflecting Telescope at Palomar

Corning Museum of Glass
In 1928, the famed astronomer, George Ellery Hale, had a vision. He wanted to build the world’s largest telescope at Palomar Mountain in California—a research instrument that would allow scientists to view the skies as never before.

Mirror to Discovery: The 200-inch Disk and the Hale Reflecting Telescope at Palomar tells the story of the creation of the huge mirror (known by the American public at the time as “The Giant Eye”) that made Hale’s vision possible.

The creation of the largest single piece of glass ever made was entrusted by Hale in 1929 to Corning Glass Works using their signature Pyrex®, a special glass designed to resist heat expansion. George V. McCauley, a Corning physicist and engineer, set about achieving what engineers at other companies had failed to do: casting a 200-inch mirror blank. The largest mirror at that time, which was installed in the Hooker Telescope at Mount Wilson, CA, measured 100 inches.

In March 1934, Corning poured a 200-inch disk, but part of the mold broke loose during the pouring, ruining the blank. McCauley decided to continue with annealing (a process required to slowly cool the glass) as an experiment. That imperfect disk has become an iconic object in the collection of The Corning Museum of Glass. It has been suspended in the same spot for 60 years, since the Museum opened to the public in 1951.

The second attempt at pouring was successful, and after a year’s annealing time, the disk was finished and taken by train to California. The creation of the disk, and its journey across an economically depressed nation, captured the public’s attention. Famed radio commentator Lowell Thomas called the pouring of the disk “the greatest item of interest to the civilized world in 25 years, not excluding the World War.”

Photographs in the exhibition show the intensive process of the pouring of the disk and include imagery of the special railroad car that carried it across the country. The disk traveled upright on a padded railroad car for more than two weeks. The train traveled only by daylight and at speeds not exceeding 25 miles per hour. It made numerous stops along the way, with much fanfare in each city where it stopped.

The disk remained at Caltech’s optical shop in Pasadena, CA, for the painstaking process of polishing and grinding. Progress on the disk slowed as the nation became involved in World War II, but the disk was finally installed in 1948 in the Palomar Observatory, where it remained the world’s largest effective telescope until 1993, aiding in the discovery of quasars and the first known brown dwarf star. The telescope is still in use, although bigger telescopes now exist at places like the Keck Observatory in Hawaii.

Mirror to Discovery includes photographs, memorabilia, and other selected historic materials from the collections of the Library, as well as reproductions of photographs from the California Institute of Technology.

Palomar Observatory
Posted by Mercury at 7:16 AM