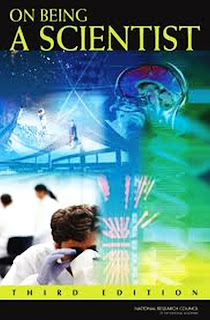 On Being a Scientist: A Guide to Responsible Conduct in Research

Maybe a copy should be given to all science graduates.

The scientific research enterprise is built on a foundation of trust. Scientists trust that the results reported by others are valid. Society trusts that the results of research reflect an honest attempt by scientists to describe the world accurately and without bias. But this trust will endure only if the scientific community devotes itself to exemplifying and transmitting the values associated with ethical scientific conduct.On Being a Scientist was designed to supplement the informal lessons in ethics provided by research supervisors and mentors. The book describes the ethical foundations of scientific practices and some of the personal and professional issues that researchers encounter in their work. It applies to all forms of research--whether in academic, industrial, or governmental settings-and to all scientific disciplines.This third edition of On Being a Scientist reflects developments since the publication of the original edition in 1989 and a second edition in 1995. A continuing feature of this edition is the inclusion of a number of hypothetical scenarios offering guidance in thinking about and discussing these scenarios.On Being a Scientist is aimed primarily at graduate students and beginning researchers, but its lessons apply to all scientists at all stages of their scientific careers.

On Being a Scientist
Posted by Mercury at 12:56 PM