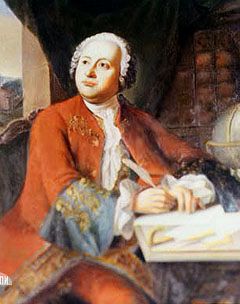 Key figure of Russian Enlightenment, polymath Mikhail Vasilievich Lomonosov (1711—1765) had discovered atmosphere of Venus during its transit over the Sun’s disc in 1761. This paper contains the first full English translation of his report (originally published in Russian in July of 1761 and in German in August of the same year), commentaries and extensive bibliography.

"Lomonosov’s Discovery of Venus Atmosphere in 1761: English Translation of Original Publication with Commentaries" by Vladimir Shiltsev

And for a translation of (the key section of) the German version I recently did see this site - whether Lomonosov saw any effects from Venus' atmosphere at all is currently being debated.