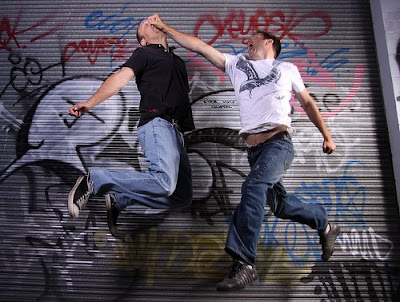 Most interesting. Who is Jason Everett Keller? What was the crux of the argument? Such passionate arguments among the homeless.

San Francisco Chronicle
A homeless man is on trial in San Mateo County on charges that he smacked a fellow transient in the face with a skateboard as the victim was engaged in a conversation about quantum physics, authorities said Wednesday.

At the time, Fava was chatting with an acquaintance, who is also homeless, about "quantum physics and the splitting of atoms," according to prosecutors.

Keller joined in the conversation and, for reasons unknown, got upset, authorities said. He picked up his skateboard and hit Fava in the face with it, splitting his lip, prosecutors said.

Fava also fell and broke his ankle, although how this happened wasn't known, authorities said.
Posted by Mercury at 4:43 AM

It would seem that most Americans who have a home, a job, and a family cannot imagine the homeless to care about anything other than where their next bottle of booze comes from.

It is a false assumption that all homeless people are alcoholics. I do find this case curious though. Unemployed physicists?

i have a contact with many in my daily excursions and most that i meet are drinking in the parks.....along the walks....so what, most choose that life while some are truly in need or mentally unbalanced.....and they have been since civilization began no doubt....at least they are not cheating people out of billions