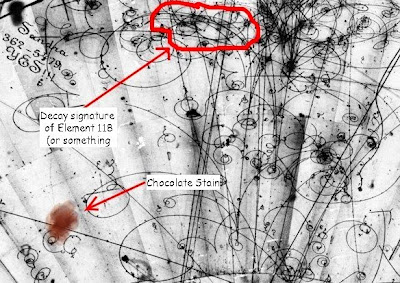 "A new chemical element in the periodic table"

Helmholtz Association of German Research Centres
The element 112, discovered at the Centre for Heavy Ion Research (GSI Helmholtzzentrum für Schwerionenforschung) in Darmstadt, has been officially recognized as a new element by the International Union of Pure and Applied Chemistry (IUPAC). IUPAC confirmed the recognition of element 112 in an official letter to the head of the discovering team, Professor Sigurd Hofmann. The letter furthermore asks the discoverers to propose a name for the new element. Their suggestion will be submitted within the next weeks. In about 6 months, after the proposed name has been thoroughly assessed by IUPAC, the element will receive its official name. The new element is approximately 277 times heavier than hydrogen, making it the heaviest element in the periodic table.

"We are delighted that now the sixth element -and thus all of the elements discovered at GSI during the past 30 years- has been officially recognized. During the next few weeks, the scientists of the discovering team will deliberate on a name for the new element", says Sigurd Hofmann. 21 scientists from Germany, Finland, Russia and Slovakia were involved in the experiments around the discovery of the new element 112.

Already in 1996, Professor Sigurd Hofmann's international team created the first atom of element 112 with the accelerator at GSI. In 2002, they were able to produce another atom. Subsequent accelerator experiments at the Japanese RIKEN Discovery Research Institute produced more atoms of element 112, unequivocally confirming GSI's discovery.

Since 1981, GSI accelerator experiments have yielded the discovery of six chemical elements, which carry the atomic numbers 107 to 112. GSI has already named their officially recognized elements 107 to 111: element 107 is called Bohrium, element 108 Hassium, element 109 Meitnerium, element 110 Darmstadtium, and element 111 is named Roentgenium.
Posted by Mercury at 6:20 AM

Element 112 has been given the proposed name of Copernicium.