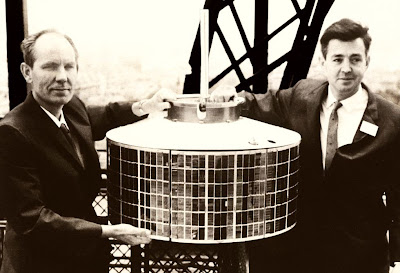 In the fall of 1957, the Soviet Union's newly launched Sputnik satellite would regularly streak across the Los Angeles sky, a bright dot in the black night.

All it could do was broadcast beeps back to Earth, but the technical achievement by the communists had stunned America. Perhaps nobody was more taken aback than a group of engineers and scientists at the defense electronics laboratories of Hughes Aircraft in Culver City.

They would trudge up a fire escape to the roof and watch the satellite with a mix of astonishment, excitement, envy and fear. Among them was Harold Rosen, a young doctorate engineer from Caltech, who while he watched Sputnik was hatching an audacious plan to eclipse the Russians.

What he imagined by 1959 was a revolution in communications: an extremely lightweight, solar-powered telephone switching station in orbit 22,000 miles above Earth. In those days, an international telephone connection required making a reservation because the existing system — copper cables and radio signals — carried few calls. Many countries could not be called at all. A satellite could change all of that.

Rosen recruited two other engineers, Thomas Hudspeth and Don Williams, and began designing the electronics and the propulsion and power system needed for a communications satellite. Not only was the task technically tough, but they also were fighting many of the nation's top experts who did not believe their idea would work. Even their bosses — at a company founded by the eccentric billionaire Howard Hughes — were not sure their project was worth a modest investment.

"I considered it me against the world," Rosen said about the initial lack of government and industry support.

Inside their labs on Centinela Avenue, the men pushed the technology ahead at blinding speed and found key allies in government who were willing to bet on a trio of unknown engineers.

On July 26, 1963 — exactly 50 years ago — they launched a 78-pound satellite called Syncom that could receive signals from Earth and then transmit them back across the globe.

Of all the technological breakthroughs made in Los Angeles during the Cold War — the laser, the first supersonic jet fighter, the Apollo moon ship, stealth aircraft, the space shuttle, the intercontinental ballistic missile system and much else — the creation of a communications satellite has had the largest and most enduring cultural, social and economic impact.

The little Syncom has morphed into communications satellites the size of school buses, weighing more than 13,000 pounds, operating with solar wings the length of a basketball court and running electronics with more power than a typical house wired to the electrical grid.

Electronic credit card authorizations, international television signals, email and social media — all the things that define our modern connected culture — were not even imagined by the public in the 1950s and would not exist today in many areas of the world without communications satellites.

About 500 such satellites are orbiting Earth, allowing cruise ships to communicate with ports, music to be beamed down to radios and television shows to arrive in living rooms, all because of a technology nearly as unknown by the public as Rosen himself.

Since the Syncom satellite launch in 1963, hundreds of communications satellites are now in the skies above Earth in geosynchronous orbit. The locations of many modern-day commercial satellites are below.

In some instances, satellites are co-located at the same latitude. To accommodate this, co-located satellites have been moved further out in the graphic, so they do not appear overlapped.

Rosen is an athletic 87-year-old with a full head of sandy-colored hair. He's lived in the same Pacific Palisades home — with ceiling-to-floor windows that overlook a lush garden — for 60 years.

His parents emigrated from Montreal to New Orleans, where he was born. After studying engineering at Tulane University, he dithered over whether to continue his education at Harvard or Caltech. The decision was made when he saw a Life magazine story about beach parties in Southern California. He bought a train ticket.

"I came out on the Sunset Limited and never looked back," Rosen recalled. "I still love the beach."

By the time Rosen arrived at Hughes in 1956, the company was gaining prominence in the scientific world. He began designing airborne radar that could spot Russian bombers, but the Air Force canceled the program and his bosses challenged him to find something new.

When Rosen's team proposed Syncom, many of the nation's top experts, notably at Bell Labs, thought they were on the wrong track. Instead, Bell Labs and others were working on a large network of satellites in low Earth orbit that would require a complex system of ground tracking stations.

Rosen was confident that he could build a satellite to operate at 22,000 miles directly above the equator, which would allow it to remain stationary and provide continuous coverage over a third of the world. The problem was that American rockets of the 1960s lacked the power to launch heavy payloads to high orbits. Rosen would have to keep Syncom as light as possible, which became the key to its success.

Top Hughes executives were reluctant to invest in a prototype, even after Rosen, Williams and Hudspeth each offered to invest $10,000. Rosen went to government offices, universities and competing electronics companies to find encouragement and a financial partner.

After Raytheon Corp. offered Rosen and his team jobs and the chance to develop Syncom there, Hughes executives changed their minds and committed to a $2-million investment.

"It was a vindication for everything we had gone through," Rosen said.

Rosen pioneered the overall concept and design: The satellite would remain stable by spinning like a gyroscope, and a propulsion system would maintain its orbital position. The barrel-shaped spacecraft was covered by solar cells that supplied electrical power.

Williams came up with a key innovation: using a single lightweight rocket engine to control the spinning satellite's position with short bursts of thrust. The resulting Williams patent, by itself, yielded Hughes millions in royalties.

By 1961, they had built a working 55-pound prototype, which they took to the Paris Air Show and used to transmit photos across the room.

The trio still needed federal government support to build and launch an operational version, though. Help came from a former Hughes executive, John Rubel, who was deputy research director at the Defense Department.

Rubel was overseeing a troubled attempt by the Pentagon to build its own communications satellite. Virtually no hardware had been created and the projected weight was in the thousands of pounds, recalled Rubel, now 93.

A friend told him about Rosen. Rubel remembered, "He had this thing that weighed 55 pounds and it was immediately obvious to me that this was it, the solution to all of our problems."

He arranged a deal to allow NASA to fund the launch. The first attempt in early 1963 failed because of a rocket malfunction. But the second launch was successful.

Test signals to a Navy ship docked in Lagos, Nigeria, confirmed the satellite was working. In a later check of the system, Rosen handed the telephone to his wife, Rosetta, and a sergeant on the other end said hello. She dropped the phone and said, "My God, Harold, it works."

With Syncom, Hughes not only had beaten out every other corporation in a landmark achievement, but it also had started a technological revolution.

"We very quickly could feel that we had the world by the tail," said Robert Roney, 90, the Hughes research director who had hired Rosen. "We were way ahead of the curve. All of us felt like we were the luckiest people alive."

Albert Wheelon, who would later become chief of the Hughes satellite business, was at the time deputy director of the CIA. He remembered reading about the Syncom launch in a newspaper.

"I said this is really important for what we are doing at the agency," he said. "Instead of putting these listening posts around the Soviet Union, we could put one of these things up in the sky and listen to everything."

One day a few years after the Syncom success, Williams visited Rosen with something on his mind. He apologized for not including Rosen's name on the patent for the rocket control system. Rosen insisted no apology was necessary. (Rosen would eventually have his name on more than 50 patents, including the basic patent for Syncom.)

Later that day, Williams went home and killed himself. He was 34.

Rosen still works a couple of days a week on satellite systems at a Boeing office in El Segundo and sometimes gives lectures to young engineers at Caltech. On occasion, he exercises on Santa Monica beach with his wife, Deborah Castleman, a former satellite engineer and deputy assistant secretary of Defense during the Clinton administration. Rosen's first wife, Rosetta, died in 1969.

Rosen has a shelf full of medals, including the Charles Stark Draper Prize, considered the Nobel Prize of engineering, which he shared with his rival John Pierce, a Bell Labs expert who in the 1950s had advocated low-Earth-orbit satellites.

The satellite technology that Rosen, Williams and Hudspeth created is now a $190-billion-a-year industry. Boeing acquired Hughes' satellite business 13 years ago and still operates a sprawling manufacturing plant with 5,200 employees in El Segundo. It has an order backlog of 32 satellites, 17 of them commercial and the balance for defense, intelligence or space agencies.

Over the years, seven Hughes employees who worked on satellites or data transmission were admitted into the National Academy of Engineering. They included Rosen, Wheelon, Roney and Eddy Hartenstein, now publisher of the Los Angeles Times, who pioneered the technology for delivering satellite television directly into homes and then created DirecTV.

Kennedy and Balewa traded pleasantries, briefly mentioned the nuclear weapons test ban treaty signed that year, and talked about a boxing match in which Nigerian middleweight boxer Dick Tiger had retained his title against an American.

The next year, 1964, the third Syncom satellite transmitted live coverage of the Summer Olympics from Japan, and Hughes Aircraft was on the way to dominating the commercial satellite industry.