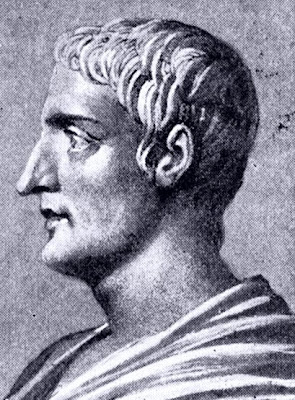 How Tacitus' Germania became the bible of German nationalism.

Slate
Perhaps the most fateful decision in all of European history was made by Augustus Caesar, when he chose to fix the border of the Roman Empire at the Rhine. As a result, the region known to the Romans as Germania would go without the products of Roman civilization—good roads and big cities and the Latin language and Christianity. But it would also remain vigorous and untamed enough to threaten Roman power, and finally destroy it in the fifth century A.D. For the next 1,500 years, the line where Roman writ ended would remain visible on the political and cultural map of Europe. The border between Romance and Germanic languages, between Catholicism and Protestantism, even between the Entente and the Central Powers in the First World War, all shadowed the border between Germania and Rome.

It is no wonder, then, that the sense of being "not-Rome," for good and ill, did so much to shape modern German identity. But the great irony, as Christopher Krebs shows in A Most Dangerous Book: Tacitus's Germania From the Roman Empire to the Third Reich, is that it was a Roman who did most to define and crystallize that proud German otherness. Cornelius Tacitus, best known for his grimly disillusioned history of Rome's wicked emperors, was also the author of a short ethnographic treatise on the German tribes, known as the Germania. This book, written in 98 A.D., was almost lost during the Middle Ages. But when it was rediscovered and disseminated in the 15th century, just as the Renaissance and Reformation were gathering force, it became something like the bible of German nationalism.

Given where that nationalism led, Krebs is quite justified in the title of his clever, learned new study, which synthesizes a great deal of classical scholarship and intellectual history into a concise, accessible story. To drive the point home, the book opens with a vignette from 1943, when SS troops were dispatched by Heinrich Himmler to a villa in Italy, ordered to retrieve the oldest extant copy of the Germania before it fell into Allied hands. They failed, but the Raiders of the Lost Ark-style mission shows just how much numinous power the Nazis attributed to this ancient book.

And they were not alone. Krebs, a German-born classicist who teaches at Harvard, shows that just about every important German intellectual movement, starting with the Reformation, made a fetish out of the Germania. Based on a simple reading of the text—and Krebs' one failing is that, in concentrating on the Germania's afterlife, he does not say enough about what it actually contains—this might seem surprising. Tacitus is hardly flattering about either the land or its people. It is "a region hideous and rude, under a rigorous climate, dismal to behold or to cultivate." The men are undisciplined and lazy, leaving all manual labor to the women, and they drink so much that "if you will but humor their excess in drinking, and supply them with as much as they covet, it will be no less easy to vanquish them by vices than by arms."

Yet if these are the vices of primitives, the Germans are also credited with the primitive virtues. They are tall, handsome, and vigorous, excellent warriors, jealous of their liberty, and sexually chaste. In short, they are the diametric opposites of the luxurious aristocrats of Rome, who were Tacitus' original readers. The historian turned the Germans into noble savages, just as later European writers would do with the American Indians, in order to reproach the excesses of his own society. As Krebs summarizes, "Freedom, fortitude, morality, and simplicity … could still, it seemed, be found, if not in Rome, at least in Germanien."

Fifteen hundred years later, when the Germania resurfaced in the library of a German monastery, it was again Romans who were most eager to read it. With a scholar's sense of the drama of bibliophily, Krebs details the quest of the Italian humanists to recover lost and unknown works of antiquity. He thrills to the brief note in the diary of a papal secretary that announces, "Cornelius Tacitus' book on 'the origin and situation of Germany' is found; seen in Rome in 1455."

But while Italians rediscovered the Germania, Germans made it a Renaissance best-seller. In an intellectual judo-flip, this Roman treatise on German primitivism was taken over by Germans who wanted to assert their historical and moral superiority to Rome. Followers of Martin Luther "produced their own Latin editions, the first German translation, and an extensive commentary" on Tacitus' work. The leading Lutheran Philip Melanchthon hoped the work would help readers "contemplate … the strength and virtuousness of ancient Germany."

Over the centuries, Krebs shows, certain themes repeated themselves in the way German intellectuals used and misused the Germania. Tacitus speculates that the German tribes were autochthonous—that they sprung from the German soil, and never mixed with any other people. After all, he reasoned, who would voluntarily leave the Mediterranean lands to live in swamps and forests? But German writers chose to ignore the insult; they loved the idea of primeval Germanness, and built towers of fantastic speculation on Tacitus' flimsy foundation.

"Some proposed that German rather than Hebrew was the primary language and that 'Adam was a German man.' " Others, noting that the Jews had borrowed the name of one of Noah's great-grandsons, Ashkenaz, to refer to Germany, suggested that this Ashkenaz was the founder of the German tribes, and that his name was a corruption of Tuisco, the god worshipped by Tacitus' Germans. When Justus Möser, the 18th-century writer-statesman, wanted to emphasize that the ancient German constitution was democratic, he turned to Tacitus' account of popular assemblies. Did Tacitus also say that the Germans were poor farmers? Never mind, Moser replied—here, the Roman was simply misreading the evidence.

In this way, Krebs shows, the Germania could be made to say just about anything an interpreter wanted. But the most fateful misreading of Tacitus emerged in the 19th century, with the rise of "scientific" racism. Now the proposition that the ancient Germans were an autochthonous people blended into the idea that they were an unmixed race, of pure Aryan stock, blessed with the long skulls that quack phrenology made the index of all virtue.

From there it was a short step to the Nuremberg Laws of 1935, by which the Nazis banned marriage between Germans and Jews. "Ideologically aligned readers of the Germania considered the laws … as the 'most recent effort' to restore the racial purity Tacitus mentioned," Krebs writes. The guidebook for the Hitler Youth carried an epigraph from the Germania: "It is the greatest honor, the greatest power to be at all times surrounded by a huge band of chosen young men." That Himmler himself—like Hitler, Goering, and Goebbels—presented a highly un-Aryan appearance didn't diminish his enthusiasm for turning the SS into a latter-day German aristocracy, as blond, tall, and warlike as Tacitus' chieftains.

Can all this be laid at Tacitus's doorstep? Was the book itself "dangerous," or were its readers simply using it to reinforce beliefs and prejudices that came from elsewhere? Krebs, writing with the full horror of recent German history in mind, delivers a harsh verdict. "Ideas are viruses. They depend on minds as their hosts, they replicate and mutate … and they gang up together to form ideologies," he writes in his introduction. And "the Germania virus … after 350 years of incubation … progressed to a systemic infection culminating in the major crisis of the twentieth century." Modern readers have often wished that more classical texts could have survived the Dark Ages, but the Germania may be the rare exception. If the last surviving manuscript had been eaten by rats in a monk's library a thousand years ago, the world might have been better off. 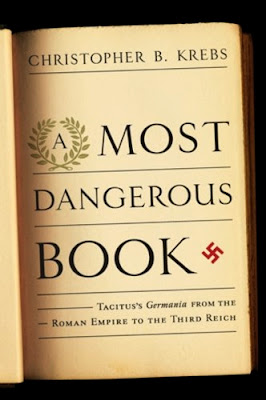 A Most Dangerous Book: Tacitus's Germania from the Roman Empire to the Third Reich

Email ThisBlogThis!Share to TwitterShare to FacebookShare to Pinterest
Labels: " A Most Dangerous Book: Tacitus's Germania from the Roman Empire to the Third Reich", " Germania", Christopher B. Krebs, Cornelius Tacitus