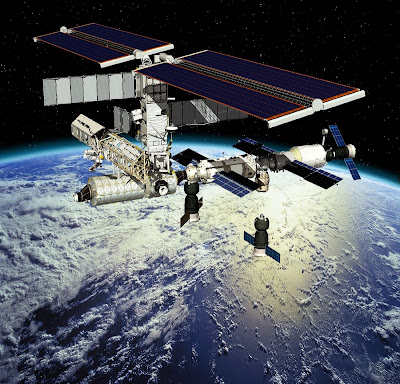 Space & Earth / Space Exploration
Russia and its partners plan to plunge the International Space Station (ISS) into the ocean at the end of its life cycle after 2020 so as not to leave space junk, its space agency said Wednesday.

"After it completes its existence, we will be forced to sink the ISS. It cannot be left in orbit, it's too complex, too heavy an object, it can leave behind lots of rubbish," said deputy head of Roskosmos space agency Vitaly Davydov.

"Right now we've agreed with our partners that the station will be used until approximately 2020," he said in comments released on Wednesday.

A piece of space debris narrowly missed the space station last month in a rare incident that forced the six-member crew to scramble to their rescue craft.

The ISS, which orbits 350 kilometres (220 miles) above Earth, is a sophisticated platform for scientific experiments bringing together space agencies from Russia, the United States, Europe, Japan, and Canada.

Launched in 1998, the ISS was initially expected to remain in space for 15 years until an agreement was reached to keep it operating through 2020.

By going into a watery grave, the ISS will repeat the fate of its predecessor space station Mir, which Russia sank in the Pacific Ocean in 2001 after 15 years of service.

Moscow this month proclaimed the beginning of "the era of the Soyuz" after the US shuttle's last flight left the Russian system as the sole means for delivering astronauts to the ISS.

Russia is currently developing a new space ship to replace the Soyuz capsule which is single-use, except for the section in which spacemen return to Earth, said Davydov.

Tests of the ship will begin after 2015 and it will have "elements of multi-use whose level will be much higher than they are today," he said, adding that Russia will compete with the United States in building the new-generation ship.

"We'll race each other."

Davydov said it remains unclear what will come after the ISS and whether mankind will see the need for a replacement orbiting close to Earth.

"Lots of our tasks are still linked to circumterrestrial space," he said, while adding that a new space station could be used as a base for building complexes that will explore deeper into space.

"I cannot rule out that it will be used to put together, create the complexes that in the future will fly to the Moon and Mars," he said, stressing that "a serious exploration" could not be done without manned flights.