Island of Sodor...a model of "imperialism"? 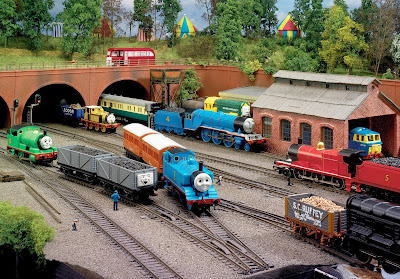 A mythical geographical location but, according to Jessica Roake, a hotbed of imperialistic philosophy. Maybe adults read too much into things..."kids just wanna have fun".

The not-so-hidden subtexts of the popular children's show.

Slate
There is something rotten on the Island of Sodor, home to Thomas the Tank Engine. Viewers won't find guns, violence, or anything even approaching a double-entendre. There's none of the blatant racism of early Disney Song of the South or religion delivered through talking produce, as in Veggie Tales. Yet something about Thomas and Friends gives liberal parents the creeps.

For example: In 2009, academic Shauna Wilton wrote that Thomas carried a "conservative political ideology." Her report was derided as whimsy-hating "political correctness" by conservative media outlets. But wait: Thomas espouses top-down leadership, is male-dominated, punishes dissent, and is uninterested in the mushy sensitivity of its PBS counterparts. (Thomas and his "friends" often "tease" like this: " 'Wake up lazy bones! Do some hard work for a change!") Its innate conservatism is as obvious as the liberalism of cooperative, solar-panel-building Bob the Builder and his band of hippie hammer-lovers. Given charges that Thomas is anti-Semitic and that Sodor is a fascist paradise, Wilton's assessment is mild. Obviously, it's foolish to claim that Thomas is a fascist. He and his friends are clearly imperialists.

How did I get here? Having failed to reach that perfect bar of parenting, no television at all until Harvard, the exhausted parent critic sits with a train-obsessed child and the TV. I'm overeducated and understimulated, with shelves full of long-ignored critical-theory books, trained in the reading of "texts" through Marxist, feminist, and postmodern perspectives. It's no wonder that the dormant critical theorist within me awakens when faced with the coded wonderland of children's programming. Hitchcock is well-covered territory, but Thomas and Friends presents a minefield of untapped deconstructing opportunities!

It may be a few years before I lay out the particularities of British imperialism to my son (I think 5 is probably about right for Kipling criticism), but it's still important to instill basic skepticism in your young media consumer. Otherwise, you face the very real possibility that your toddler, raised in an environment full of labor abuses and pro-toadying propaganda, might one day look at you and earnestly promise to be "very useful"—the show's highest compliment for an engine. In our home, Thomas and Friends must rule Brittania no more, and some ugly truths about unjust train society must be told.

On the Island of Sodor, the sun has not yet set on the British Empire, and the consequences of defiance are illustrated in parables like "Hiro Helps Out." Hiro, Asian immigrant (he is voiced by Japanese actor Togo Igawa, and the images of his island home mirror traditional ukiyo-e woodcuttings) and onetime "Master of the Rails," here oversteps his authority. In an effort to assist Sir Topham Hatt, the "controller of the rails," who is oddly discombobulated, Hiro decides to give the other trains their orders himself. But initiative is not a virtue on the Island of Sodor, and stepping above one's station is a serious offense. When Sir Topham Hatt finds that Hiro has appointed himself middle-manager, he is furious ("I am controller of the railway!").

Hiro apologizes profusely, almost tearfully ("I thought I was master of the rails, but I am only master of the muddle"), but that is not enough. Hiro must go to each individual train to prostrate himself and explain that only Sir Topham Hatt gives orders. He apologizes to each train for giving them instruction, saying "I was wrong. Sir Topham Hatt didn't want that at all." Once he has completed his shame tour (one half-expects Hiro to commit hara-kiri than face the depth of his dishonor), Hiro chugs back to Sir Topham Hatt's side, where the benevolent master tells him he is "helpful," which in turn makes Hero "happier than he had ever been." To say this is a little conservative is like saying that Animal Farm is a little allegorical.

Yet the conservatism of Thomas and Friends is not the conservatism of America. Key to the "pick yourself up by your bootstraps" mythos in the United States is the notion that anyone can rise to the top with hard work and initiative. The Thomas series glories instead in true "white man's burden" style British imperialism. Our hero, Thomas, and his friends jockey for positions just below that of the bullying aristocrat Sir Topham Hatt but never seek to rise to his level. The stern, dour little Englishman in top hat and tails dangles meaningless honors like getting to "carry the most special special" to divide and conquer the trains.

Sir Topham Hatt, careful to curb over-confidence, expresses paternalistic disappointment in his engines with the admonishment that that they "have caused confusion and delay." As a reward for good behavior, he assigns them to hard labor on the ever-expanding "duke and duchess' summer house," yet another "special special." Enforcing their role as grateful servants to the Sodor upper class, Sir Topham Hatt gives the trains demeaning tasks like picking up his niece, even when their paint jobs are not yet complete! James the engine has to go out pink, even though his self-worth is tied to being red and he is teased mercilessly by the other engines! Still, the trains speak Sir Topham Hatt's name in hushed tones and do whatever he commands without question.

One suspects that Sir Topham Hatt spent some time in colonial India. Thomas' creator, the Rev. Wilbert Awdry, certainly idealized the British empire of the 19th and early 20th centuries in his Railway Series books. An Oxford-educated Anglican clergyman, Awdry told his first train story to measles-ridden son Christopher in 1943, while a minister in Birmingham (in exile for his pacifist views on World War II). He began to write and publish his stories in 1945, setting his trains' adventures on Sodor, an island situated, according to Mark I. West's A Children's Tour of British Literature, "in the North Sea ... not only set off physically from Britain, but also separated from the modernization that occurred in Britain after World War II." On Sodor, the messiness of midcentury British class conflicts, civil-rights movements, and post-colonial political struggles never happened, erased by a minister nostalgic for the power and the glory of the British empire. The reverend later reflected on his two vocations, railways and the church, by saying, "both had their heyday in the mid-nineteenth century; both are regularly assailed by critics; and both are firmly convinced that they are the best means of getting man to his ultimate destination."

If you observe closely, that destination is a nasty, brutish one. The trains, complicit in maintaining this unjust system, humiliate each other for the small scraps of praise the little tyrant doles out rather than banding together (no unions on Sodor). Thomas and Percy are supposedly best friends, but they bicker constantly over those "special special" jobs. These rivalries are punctuated by nasty banter ("Thomas knew that Percy was scared, so he teased him even more" doesn't sound like a very healthy friendship), which fuels the larger system of cruelty.

Whenever trains express interest in travelling, or doing another job, or flying like Harold the Helicopter, they are mocked and derided until they stop dreaming and accept their station. Engines who threaten efficiency with burdensome personalities, such as the criminally giggly "Logging Locos," are banished from Sodor. When new and foreign trains arrive on the island, they are subject to jealousy and derision, as the Sodor engines are continually made to fear obsolescence. When Hiro, once the most impressive engine on Sodor, is found literally rotting in the forest after years of neglect in Hero of the Rails, he begs Thomas not to tell Sir Topham Hatt, for fear of being made into scrap metal because he is no longer "really useful." Through humiliating trials, these foreign engines either abandon their strange customs (i.e., pride, inability to take a firm hand with serf-like cargo) and adapt to Sodorian culture or fail to overcome their otherness and leave. Hiro is eventually restored to his former glory (Sir Topham Hatt remembers the onetime master of the rails from his childhood; would he have saved a small engine unknown to him?), but still chooses to go back to his island, to be among his own kind.

Within the engine ranks, the trains enforce clear hierarchies and mirror the class rigidity of their aristocratic masters. "Steamies" are better than "dirty diesels," and the number of tenders a train commands are his marks of distinction. In Misty Island Rescue, Sir Topham Hatt offers the privilege of pulling special "jobi" wood to the most useful engine. When "Diesel" (that is his name; his caste merits no proper name) suggests that he might compete for this honor, Thomas laughs at him, saying, "I'm sure [Hatt] means a really useful steamy; you'll never be that!" When Diesel decides to prove Thomas wrong by stealing the jobi logs and pulling them himself, thus reinforcing all negative diesel stereotypes, he speeds dangerously out of control. Thomas, primarily concerned with saving the cargo, saves Diesel as he hangs off a cliff, but loses the wood. Thomas is unable to feel much pride in saving another's life and sighs balefully over the loss of such valuable timber. Sir Topham Hatt reinforces this perverse value system by bemoaning the loss of the wood, and publicly shames Diesel before sending him back to work in a dark tunnel. Did I mention that Diesel is black?

Since the company HIT entertainment took over the Thomas franchise in 2003, it has revamped the show's original model-train style and done away with the incongruous narration of liberals George Carlin and Alec Baldwin. (Please imagine Alec Baldwin saying, "You're just a small green engine with ideas above your station!") The new Thomas is a CGI'd, multiple voice actor extravaganza with nary an iconoclast narrator in sight, and the cast of trains has diversified a bit. There are more female and foreign engines, the narratives have softened, and Sir Topham Hatt occasionally smiles. But once you have engaged in Thomas cultural criticism, there's no going back. It's nearly impossible to listen to lines like "being strong was only good if you were also really useful, and he had to be really useful" without hearing something sinister. Cast off your shackles and rise up, little engines! Down with Topham Hatt! Sodor revolution now!
Posted by Mercury at 6:27 AM