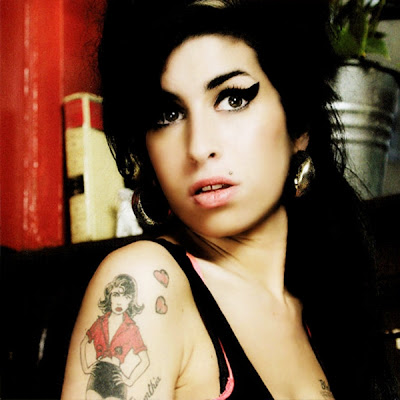 At 27: Jimi Hendrix and Janis Joplin and Jim Morrison...a coincidence. Drugs and alcohol will do it. But then, W. Shakespeare may have used weed .

When the news of Amy Winehouse’s death hit, I couldn’t help but thinking of how she’d told me that, in 10 years, she’d be “dead in a ditch, on fire.”

It’s important to emphasize that this was a joke, not a prophecy. It’s hard to know whether she was really self-aware enough to be as worried about her own fate as everyone else would soon become.

She was one of the toughest nuts I’ve ever tried to crack. I eventually came up with plenty of quotable material, but it took hours of interviews over two frustrating days, filled with awkward silences, to come up with those quotes.

People asked later if I thought she was on drugs. But I suspect the problem I was having with Winehouse wasn’t that she was under the influence. It was that she wasn’t. And momentary sobriety is not the most comfortable place to encounter an addict.

When I first met Winehouse (after being stood up several times), it was in the dressing room at “The Tonight Show,” as she had her hair done -- which, as you can imagine, was a finely tuned process. When I got to asking about the personal nature of the songs on her stunning second album, “Back to Black,” we found ourselves at a kind of loggerheads.

“When I went into this album, I just felt really sad,” she told me. “I felt really bad. I was clinically depressed, and I put it into music. And that was me at that time. When those things…” She paused and thought better of going any further. “Sorry, I’m really s---ty at interviews. I’m not great at talking about … I just think … the songs are enough.”

There were eventually enough profound pauses that I meekly asked if she would be okay answering just a few more questions. She suddenly seemed to feel sympathy for my plight. “Not at all! I mean, I’m just saying, I’m sorry. Ask whatever you want; be as long as you want. I’m just not the best at … Yeah, I’m not very good at talking about stuff. But let’s keep trying!”

Right then, I found her endearing, her inability to be “on” notwithstanding.

The next day, I tried again, first in the green room at a radio station before she did a truly awkward on-air interview, then in a long limo ride to LAX that I prayed would end to put both of us out of our misery. There were moments where a light went on in her eyes and she seemed empathetic, smart, witty, and engaged. Then a wind would extinguish that candle again. Was she shy? Bored by my questions? Made dull by lack of drink? What could I say or do to make the light stay on?

I asked her about the origin of “Rehab,” which producer Mark Ronson encouraged her to turn into a song after a stray sung remark. “We were walking down the street, on our way out to the pool hall, and I sang out of nowhere, like a joke,” she said. “And Mark was like, ‘Who’s that?’ I said, ‘It’s no one, I just made it up.’ He’s like, you should do that as a song, it’s funny. And I was like, it’s true.”

We talked about her then-new engagement to the on-again, off-again love of her life, Blake Fielder-Civil, the subject of much of the obsessive “Back to Black” album and a fellow addict who would soon be widely seen as a destructive force in her life. At times, she perked up and we seemed to be connecting.

Do you feel like you’re a true romantic, or is there a cynicism that keeps you from being the ultimate romantic?

No, I’m a very romantic person. I’m romantic about everything.

I think people think of you as being…

No, not that. Some of the songs describe obsessive love, and people hear that and want to believe that’s real, and that at the peak of experience, you’re really that obsessive about love and who you’re with.

Yeah. If you don’t throw yourself into something, you’ll never know what you could have had.

You’ve called your makeup “the warpaint.” And there’s the beehive. Do you have good hive days and bad hive days?

Never. Never. My hair is always on point, even if the rest of me is really naff.

When you were at Leno yesterday, one of your stylists was trying to get you to go out for a night of drinking…

I don’t have a drinking problem. I just didn’t feel like drinking. I only had one drink last night. I was drinking Shirley Temples, and then I had a Jack and Coke. But that was it.

You've said you admire Dean Martin. He got to the point where people expected a certain image, so when he wasn’t drinking, he had to have colored water in his glass.

No, it was the opposite -- the other way around. He started out with colored water, and then in the end he did start drinking like that.

Do you ever feel like you’ll let people down if they expect this raconteur who’s wild and you don’t deliver?

No. If someone goes “Amy, let me buy you tequila,” and I’m like “No, no, I’m not drinking,” if they ask why, I always say that I’m on antibiotics. Because I’m ashamed to just go, “You know, I’m just not drinking.” I have to say that I’m on a course of medication, because I feel ashamed (about abstaining).

The label went with another single before “Rehab,” and I wondered if it’s because they were nervous because Americans are conflicted with our attitudes about consumption.

I don’t know. Everyone knows that there’s certain things that aren’t good for you, but there’s a fine line between enjoying yourself and being completely healthy. Or do you know what I mean? You can only be healthy to a point, where you’re not having fun anymore. Does that make sense?

With the first album (“Frank”), you said you were in a defensive mode when you wrote that, more so than the second album (“Back to Black”). The second album, you wanted to write about consuming love and not be in that defensive posture. Do I have that right?

Yeah, it’s a lot less defensive. And it’s very all or nothing. When I did the first album, I was smoking loads of weed, and I had that whole mentality of “you don’t know me, I don’t need you, you don’t love me, fuck you.” And when I wrote the second album, I was listening to a lot of pure ‘60s music, a lot of jukebox stuff—and I was drinking a lot, which is a lot more of a depressive substance than weed.

So my mentality flipped from “Yeah, I don’t need you, I’m gonna smoke a joint, I don’t care” to listening to the jukebox and (sadly) standing with a drink.

When your first album came out, someone asked where you’d be 10 years from now, and you said…

Dead. Dead in a ditch, on fire.

No, no. At that time, you said you imagined yourself in 10 years being a happy housewife with three kids. But some time has gone by since then, so you’d have to do some work to catch up with that now.

Is that a proposition?

Now, that was a funny line.

I wanted more lines like that – partly because, as a journalist, I wanted my subject to perform for me. But more than that, as a fan, I just wanted to see an Amy Winehouse who was as self-aware and sharp and creative as the one I’d heard on two utterly brilliant albums.

I wanted to believe that she could be half as great in life as she was on record. I kind of sensed that I wanted her to believe it, too.

We emerged from the limo at the airport, and she headed into the terminal, too excited about catching a flight to meet her beloved Blake to worry about niceties like saying goodbye. I stood on the curb trying to hail a taxi, wondering what to make of the lost-seeming savant I’d just encountered.

Once the stereotype emerged of Winehouse as a stumbling, slurring lush who couldn’t make it through a show without being mocked around the world, detractors began to propose that the greatness of “Back to Black” belonged to savvy producer/co-writers, not her.

The cure for that is to go back to her first album, “Frank,” which is even more clever than its Grammy-winning follow-up smash, if less emotionally devastating. Listen to “F--- Me Pumps,” a hilarious spoof of a certain kind of working-class, man-hungry English female.

Someone who could satirize others as brilliantly as that never should have become so easily parodiable herself. And the devastation in her songs should never have become increasingly self-fulfilling schtick. We’ve lost a great artist, not a caricature.

Black was definitely her color. But here’s hoping her final moments were a fade to white.