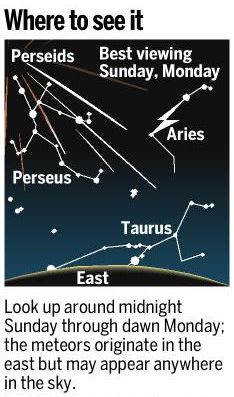 
Stargazers will be treated to a spectacular fireball show early next week when Earth hits a belt of comet debris known as the Perseids, astronomers say.

The annual Perseid meteor shower, dubbed "the tears of St Lawrence" in honour of a martyred Christian saint, should peak in the wee hours of Monday and Tuesday with between 60 and 100 shooting stars per hour.

They will be visible over most of the world, but most clearly in the northern hemisphere, aided by an early-setting crescent Moon leaving a dark canvas for the celestial fireworks.

Cloudless skies permitting, the best viewing time will be the hours just before dawn on Monday and Tuesday, the head of US space agency NASA's meteoroid office, Bill Cooke, told AFP.

"Go outside, allow about 30-45 minutes for your eyes to dark adapt. Lie flat on your back (sleeping bag or lawn chair) and look straight up: take in as much of the sky as you can," he said by email.

"My experience is that most people who are disappointed viewing meteors go out for only a few minutes expecting to see something: this will work only for major outbursts not normal meteor showers. So be prepared to spend at least a couple of hours outside; don't expect to see many before midnight."

According to the European Space Agency, the Perseids are sand- to pea-sized bits of rocky debris ejected by the comet Swift-Tuttle, which is slowly disintegrating on its orbit around the Sun.

Over the centuries, its remains have spread along the comet's orbit to form a stream of particles hundreds of millions of kilometres long.

Earth's path around the Sun crosses the stream every mid-August.

The particles, called meteoroids, hit our planet's atmosphere at about 60 kilometres per second (37 miles per second) -- each igniting in a white-hot streak of superheated air.

According to Cooke, the Perseid showers produce more fireballs than any other.

They are named after the star constellation of Perseus from which they appear to spread out, and have been seen for about 2,000 years -- the earliest observations recorded in China.

St. Lawrence was an early Christian deacon tortured to death by the Romans in AD 258. His saint's day of August 10 coincides with the Perseids buildup.

According to legend, Laurentius was martyred on a iron grill over a fire, during which ordeal he is said to have quipped to his persecutors: "Turn me over. I'm done on this side!"

He is the patron saint of cooks.

Dim the lights, grab a blanket and hope for clear skies -- an annual magic show, the Perseid meteor shower, can be seen Sunday and Monday nights.

You don't need tickets to view nature's free show. And no binoculars are needed, because the flashes may be anywhere in the sky, though they will seem to come from the northeast.

"The crucial issue is that meteors are faint, so you need a location where the sky is dark," according to Andrew Fraknoi, chairman of the astronomy department at Foothill College in Los Altos Hills. "The darker your site, the more you will see."
Your best views come after midnight -- so it is an event most appreciated by night owls. That's because the Earth turns after midnight to face

the shower, so the meteors come more directly at us. And the crescent moon has set, immersing us in darkness.

At its peak, it is possible to see up to sixty shooting stars per hour. The shower actually started in July and will extend for most of August, but with less drama.

The stars are called the sons of Perseus, because they seem to shoot from that constellation, named after the Greek demigod famed for saving Andromeda from a sea monster. They were first recorded 2,000 years ago.

But they're not really stars -- just meteoric dust, no bigger than the size of a dime. They burn as they careen into the Earth's atmosphere at 7 to 44 miles per second.

"They are cosmic 'garbage' left over from a regularly returning comet, called Swift-Tuttle," after its discoverers, Fraknoi said. Leftovers from the early days of our solar system, the flashes are the last gasp of cosmic material that formed about 5 billion years ago.

To enjoy the event, get away from city lights and coastal fog. State or city parks or other safe, dark sites are your best bet. Dress warmly for nighttime temperatures.

Once you have settled at your observing spot, lie back so the horizon appears at the edge of your peripheral vision, with the stars and sky filling your field of view. Meteors will grab your attention as they streak by.

Be patient -- because they are more subtle than fireworks, it may take up to 15 minutes for your eyes to adjust to the dark. Several minutes might pass without a single flash.

If it's cloudy, don't despair: Another meteor shower, the Leonids, will spark the nigh sky on Nov. 16.


Another reminder...the Perseid meteor shower
Posted by Mercury at 5:51 PM

Email ThisBlogThis!Share to TwitterShare to FacebookShare to Pinterest
Labels: Perseids 2013