"Too Much Johnson" redux 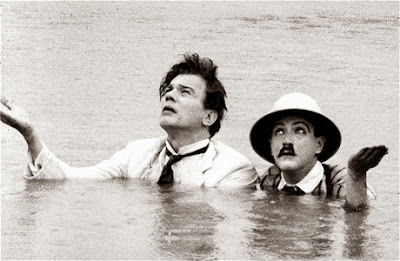 Joseph Cotton and Edgar Barrier in the 1938 Orson Welles film Too Much Johnson.

Too Much Johnson, a silent film made by Orson Welles in 1938 and lost for three decades, has been restored and is being screened in Italy

Too Much Johnson, the first professional film made by Orson Welles and which has been lost for 30 years, is being shown in Italy today after being mysteriously recovered from a removal company warehouse. The silent film was found by the staff of Cinemazero, an art house in Pordenone.

Demand to see the film – a slapstick comedy which stars a young Joseph Cotton as a playboy who flees the violent husband of his mistress – has been so high that organisers of the Giornate del Cinema Muto annual silent film festival in Pordenone have been forced to add extra showings.

The 40-minute film was made three years before Welles directed Citizen Kane in 1941, but it was never publicly screened. It is believed to be his first professional film and was intended to be shown as part of a performance of an 1894 play by William Gillette, when theatre director Welles was making his transition to film-making.

Restorer Paolo Cherchi Usa told AFP: "The discovery is a real detective novel of a story. It is a real mystery. I only have a few facts. The reels were in surprisingly good shape even though they were not kept in the right conditions, except for one where you could not see a thing which was restored in the Netherlands."

Usai carried out most of the restoration himself at the George Eastman House film institute in Rochester, New York, where the original is now being stored. The film will be screened in America next week.

Usai added: "We have been inundated with requests and the showing in Italy has been booked out for months. We have been forced to organise two more showings on Friday to accommodate all the requests."

The film, which was produced by John Houseman, also starred Edgar Barrier, Arlene Francis and Ruth Ford. Welles had a small role as a Keystone Kop. Welles, who died in 1985 at the age of 70, never allowed the footage to be seen publicly, stating the film would not make sense outside of the full context of the play. The copy he owned was destroyed in a fire at his Madrid villa in 1970. 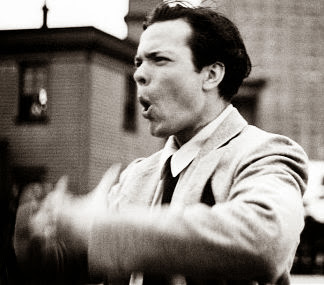 Orson Welles played a cop in Too Much Johnson. 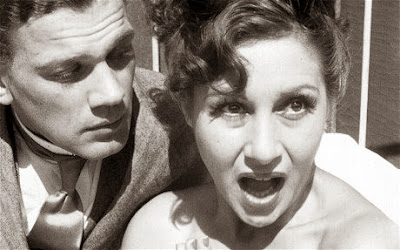 
Orson Welles' film “Too Much Johnson” discovered
Posted by Mercury at 8:23 AM

Email ThisBlogThis!Share to TwitterShare to FacebookShare to Pinterest
Labels: Orson Welles, Too Much Johnson