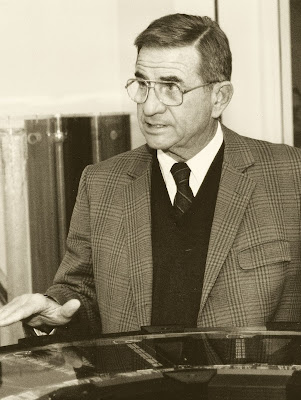 Professor Emeritus John Killeen knew fusion science as a pioneer in the field, from around the time of the then-secret Project Sherwood at UC’s Livermore lab. And he knew the power of computers from their very inception, using practically every generation since in practical scientific applications.

He melded his expertise into a renowned career at UC Davis, as one of the first instructors in the Department of Applied Science, and at the Lawrence Livermore National Laboratory, where he was the founding director of the Controlled Thermonuclear Research Computer Center and the Plasma Physics Research Institute.

Killeen, a member of the American Association for the Advancement of Science and former principal editor of the Journal of Computational Physics, became an emeritus after suffering a stroke in 1989. He died Aug. 15 of cardiac arrest at Chaparral House in Berkeley, at the age of 87.

He joined the College of Engineering shortly after its establishment nearly 50 years ago, as a lecturer in mathematical science in the Department of Applied Science, founded by the famed nuclear physicist Edward Teller in 1963. The department operated in Davis and Livermore.

“John’s colleagues remember him as a strong advocate of campus-laboratory collaboration, which has become more common today in great part because of his efforts,” Enrique Lavernia, dean of the College of Engineering, wrote in an email to college faculty and staff.

Killeen was appointed to a professorship in 1968, serving part time while also working as a scientist at the Livermore lab. He was later appointed as an associate dean, in charge of graduate students and research in the College of Engineering.

“John delivered lectures that were lucid, rigorous and elegant,” former graduate student David V. Anderson said in 1992 during the International Workshop on the Theory of Fusion Plasmas, in Varenna, Italy.

Killeen also went to Italy, honored during the workshop there for his contributions to computational physics in magnetic fusion research.

He attended UC Berkeley, earning a bachelor’s degree in physics (1949), and a master’s (1951) and doctorate (1955) in mathematics, the latter two while working at the Lawrence Berkeley lab. His introduction to computing came during his time as a Ph.D. candidate, when he worked on the differential analyzer, a forerunner of the modern digital computer.

He left Berkeley for a stint as a mathematician at Bell Telephone Laboratories in New Jersey, followed by a year as a research associate at the Atomic Energy Commission Computing Facility (today known as the Courant Institute of Mathematical Sciences) at New York University.

“John was a pioneer in our national fusion program,” said Lavernia, noting that Killeen’s association with the program began in 1956 during his time as a post-doctoral fellow at the Courant Institute.

Killeen returned to California in 1957 to join Project Sherwood.

The government partially declassified this research in controlled thermonuclear reaction in 1958 in time for the second U.N. International Conference on the Peaceful Uses of Atomic Energy. Killeen co-authored a paper for that conference, the first of his more than 90 publications, including the book Controlled Fusion.

The 1960s brought what Anderson called “a veritable garden of experiments” to Livermore: pinches, mirror devices, stellarators, levitrons and the Astron, among others — and Killeen developed numerical models of these experiments, to solve on the latest computers. (His daughter Kate, who is not a physicist, knew of “Astron” only as the name of the Killeen family’s dog!)

Meeting the need for large-scale computing

In 1973, John Killeen participated on a committee that identified the need for large-scale computing in the magnetic fusion program. Subsequently, he led the Controlled Thermonuclear Research Computer Center from its opening in 1974 until his retirement. (The center has undergone two name changes: in 1977, to the National Magnetic Fusion Energy Computer Center, and, in 1990, to the National Energy Research Supercomputer Center.

“The center, under John, pioneered in time-sharing, parallel algorithms and network supercomputing — long before its rivals,” Anderson said. “Its successes have been imitated by many other scientific computing facilities, including the National Science Foundation Computer Centers in the United States.”

In 1996, the National Energy Research Supercomputer Center dedicated a new Cray J90 shared-memory multiprocessor to Killeen — in accordance with the center’s traditional way of honoring important contributors to mathematics and science.

The center’s executive committee made the decision on behalf of the Energy Research Supercomputer Users Group, as a way to publicly acknowledge Killeen’s contributions “to the development of supercomputing as a fully functional tool in our scientific and computing endeavors.”

“But this is not all. He has also been a teacher and doer. It is particularly important to this user group that he has steadfastly served as the user’s advocate ‘at the top.’”

In 1980, Killeen received the Department of Energy’s Distinguished Associate Award, the department’s highest honor, in recognition of his contributions to the magnetic fusion energy program.

Killeen engaged in extensive international collaboration and was on extended assignment at the United Kingdom Atomic Energy Authority’s Culham Laboratory (known today as the Culham Centre for Fusion Energy) in 1962-63 and again in 1971.

He was an avid fan of Cal athletics, and he kept up with a sport of his own: swimming, as a member of the Strawberry Canyon Aquatic Masters in Berkeley, and as a competitor in races in the ocean, in San Francisco Bay and in high mountain lakes.

Killeen is survived by his wife, Marjorie, also of Berkeley; and five children, Michael of Davis, Sean of Kentfield, Jack of Santa Rosa, Joan of Berkeley and Kate of Sacramento (all UC Berkeley graduates); and 10 grandchildren and two great-grandchildren. He was preceded in death by a daughter, Ann.

John Killeen, the founding director of what is now known as the National Energy Research Scientific Computing Center (NERSC), died August 15, 2012 at age 87. Killeen led the Center from 1974 until 1990, when he retired. The Department of Energy conferred its highest honor, the Distinguished Associate Award, on Killeen in 1980 in recognition of his outstanding contribution to the magnetic fusion energy program.

Initially known as the Controlled Thermonuclear Research Computer Center when established in 1974 at Lawrence Livermore National Laboratory, the center was renamed the Magnetic Fusion Energy Computer Center in 1976. To reflect its broadened mission support of other science domains, the center was rechristened the National Energy Research Supercomputing Center in 1990.

When the center moved from LLNL to Berkeley Lab in 1996, one of the new Cray J-90 supercomputers was named in honor of the founding director.

Born in 1925 in Guam to a Navy family, he entered the U.S. Naval Academy at Annapolis, Maryland at age 18. Following World War II, he earned a B.A. in physics at the University of California, Berkeley. There, while living at International House, he met his wife of 62 years, Marjorie. He continued his studies at U.C.B. and was awarded a M.A. and Ph.D., both in mathematics.

His long association with the Lawrence Livermore National Lab began in 1957 when he worked on the then-secret U.S. fusion effort called Project Sherwood. In 1958, this controlled thermonuclear reaction research was declassified in time for the Second United Nations International Conference on the Peaceful Uses of Atomic Energy and for which Killeen coauthored a paper, the first of 90 publications throughout his career.

Killeen taught mathematical science at the University of California, Davis and was an original faculty member for the Department of Applied Science, founded in 1963 by Edward Teller. He was later appointed associate dean of the U.C.D. College of Engineering.  As first director of the Plasma Physics Research Institute, he promoted collaborative work in plasma physics between universities and Lawrence Livermore National Laboratory.