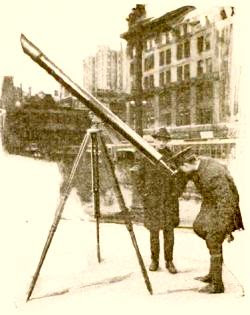 Learning from the people who set up telescopes on city streets.

The sidewalk astronomer—usually a star-haunted amateur setting up a personal telescope on city sidewalks for both money and love—is familiar with doubt.

Mr. Tregent, 1856: “Sometimes when I have been exhibiting, the parties have said it was all nonsense and a deception, for the star was painted on the glass. If the party has been anything agreeable, I’ve taken the trouble to persuade him. I’ve, for instance, placed the star on the very edge of the glass, and then they’ve seen it travel right across the field; and as I’ve told them, if it was painted it couldn’t move and disappear from the lens.”

Joseph G. White, 1921: “ ‘This is a fake,’ he exclaimed. ‘There isn’t any such thing in the sky. You’ve got this thing fastened here in the tube to fool people.’ The sidewalk astronomer proved that Saturn was real by telling the man to watch it move out of the field of view by himself moving the telescope tube.”

Herman Heyn, 2012: “Frequently Asked Questions: ‘Is that the real Saturn? I don’t believe it!’ Used to try to prove to them 5 different ways that it is real. Now I just say, ‘If it looks fake, it’s in good focus!’ I also say that if I was going to fool you I wouldn’t need to bring 70-lbs of equipment down here but could do it with a paper towel roll! These days it’s helpful when someone comes along with an iPhone with a sky app which shows Saturn where my scope is pointing.”

* * *
Herman Heyn is Baltimore’s local sidewalk astronomer. He’s out about 60 nights a year—it used to be three or four times a week. These days he sets up in a nightlife-rich area on the harbor called Fells Point. He makes less money there than in the more tourist-rich Inner Harbor, but in Fells Point the parking is nearer and at the Inner Harbor, while getting to and from his car he worried about muggers. He puts out a plastic cowboy hat—looking is free but contributions are welcome—that he’d reclaimed from his trash his first night out and kept it because that night he collected $10 and the next night, $40. His current income is from Social Security (his job history has included truck driver, lab tech, office manager for a small construction company, T-shirt designer, and a stint in the Korean War) and maybe $4,000–$6,000 a year (it used to be more like $10,000) from telescoping. He reports every penny to the IRS and lives, he says, low on the hog. He’s been doing this since Nov. 13, 1987. He’s 82 years old.

Years ago, he used to go out during the day—more customers—and aim his telescope at the planets or the moon, and he got pretty good at finding the bright Arcturus. He’d begin by orienting his telescope on true north—astronomers usually orient on the North Star, Polaris, but it’s too dim in daylight—so instead he’d sight up a north-south street, then nudge the telescope to the right. He wondered about that nudge. Then he remembered an oddity he’d noticed about the Baltimore map: It shows a grid that’s tidy and square but slightly canted, 3.5 degrees off true north. He knew that the earth has two norths: the true north of the North Pole (and Polaris) and the magnetic north to which compass needles point. So he went to the archives and found that when Baltimore’s streets were laid out in 1730, magnetic north was offset from true north by 3.9 degrees, meaning that a lazy surveyor had used his compass and not corrected for true north. Herman later presented this finding at a poster session of the American Geophysical Union.

He has a college education, but he learned about true and magnetic north from Miss Audrey Wicker in junior high. She had silver glasses, curly hair, and slightly buck teeth, and one day she drew the Big Dipper on the blackboard and told the students to go out that night and find it. Herman did; he looked up at the sky, “and there it was,” he says, “just as she had drawn it.” It hooked him: Those stars, they’re real, they’re really there.

In Fells Point, Herman sets up his telescope, hangs out his Hav-A-Look sign, sights on a “very pretty yellow and violet double star in Cygnus the Swan,” called Albireo, and starts chatting up the passers-by: “Have a look, folks, at some awesome stars.” Albireo is really two stars so close together they look like one, he explains, but “I did the calculations last night and the line-of-sight separation between them is 400 billion miles.” This summer, Saturn is up, and of course the moon swings through every couple of weeks. Last summer, it was the transit of Venus. Sometimes his old friend, Phyllis, is in town and comes along; she’s good at talking to people. He doesn’t get tired of explaining the same things over and over. He thinks he’s just doing what Broadway actors have to do, and he likes being on stage. He’s also got enough stamina to stay enthusiastic for three hours a night, and he’s always liked teaching: He gives out “facts blurbs” to his “lookers,” he says, “willy-nilly.”

One night in 1994, a planetary scientist named Heidi Hammel gave Herman a dollar for a look through his telescope at the scars of Comet Shoemaker-Levy’s impact on Jupiter. Hammel was in Baltimore to look at the same impact with the Hubble Space Telescope. Herman didn’t know who she was until he heard her later on NPR, talking about looking at the Space Telescope’s beautiful digital images and then being shown the same thing by a sidewalk astronomer. “She called it the most meaningful and memorable experience of the whole thing for her,” Herman said. “That was the first time she actually looked directly at Jupiter and saw the black marks with her own eyes.” Much the same phenomenon as Miss Wicker, the Big Dipper, and young Herman. The comets and planets, they’re really out there.

Mr. Tregent, 1856: “She threw her hands up and cried, ‘If this moon is so beautiful and wonderful, what must that God be like who made it?’ And off she went. It was very fine, wasn’t it?”

Joseph G. White, 1921: “It is strange to see a homeless man gazing at the shadowy valleys on the moon or the glittering beauty of the Milky Way. He realizes that life is less than a ‘tick’ in the great clock of eternity.”

Herman Heyn, 2012: “Frequently Asked Questions: (after looking at Saturn) ‘Can anybody but God have made that?’ ”

When lookers ask him that question, Herman punts and pleads the Fifth. But in fact, he’s a nonbeliever. In 1996, he sent a letter to the editor of the Baltimore City Paper: “If a Supreme Being created the universe in all its glory, then who created the Supreme Being?” he wrote. And if we can accept the existence of the Supreme Being as a given, he added, “then why can’t we do the same for the existence of the universe itself?” He doesn’t need faith—it’s really out there; he can see it.

The sidewalk astronomer is a small embodiment of larger principles. People like to ask questions directly and get direct answers. They like to see things that they hadn’t seen before and that they don’t need faith to believe.


Pied Piper of Astronomy
Posted by Mercury at 5:57 PM