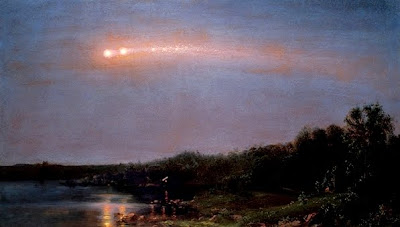 On the evening of July 20, 1860, a meteor fragmented during its nearly-horizontal passage through the Earth’s atmosphere and became a fireball procession, the subject of a painting by Frederic Church and a poem by Walt Whitman.
LEAVES OF GRASS

Year of meteors! brooding year!
I would bind in words retrospective some of your deeds and signs,
I would sing your contest for the 19th Presidentiad,
I would sing how an old man, tall, with white hair, mounted the
scaffold in Virginia,
(I was at hand, silent I stood with teeth shut close, I watch`d,
I stood very near you old man when cool and indifferent, but trembling
with age and your unheal`d wounds you mounted the scaffold;)
I would sing in my copious song your census returns of the States,
The tables of population and products, I would sing of your ships
and their cargoes,
The proud black ships of Manhattan arriving, some fill`d with
immigrants, some from the isthmus with cargoes of gold,
Songs thereof would I sing, to all that hitherward comes would welcome give,
And you would I sing, fair stripling! welcome to you from me, young
prince of England!
(Remember you surging Manhattan`s crowds as you pass`d with your
cortege of nobles?
There in the crowds stood I, and singled you out with attachment;)
Nor forget I to sing of the wonder, the ship as she swam up my bay,
Well-shaped and stately the Great Eastern swam up my bay, she was
600 feet long,
Her moving swiftly surrounded by myriads of small craft I forget not
to sing;
Nor the comet that came unannounced out of the north flaring in heaven,
Nor the strange huge meteor-procession dazzling and clear shooting
over our heads,
(A moment, a moment long it sail`d its balls of unearthly light over
our heads,
Then departed, dropt in the night, and was gone;)
Of such, and fitful as they, I sing--with gleams from them would
gleam and patch these chants,
Your chants, O year all mottled with evil and good--year of forebodings!
Year of comets and meteors transient and strange--lo! even here one
equally transient and strange!
As I flit through you hastily, soon to fall and be gone, what is this chant,
What am I myself but one of your meteors?

University News Service
In his landmark collection Leaves of Grass, famed poet Walt Whitman wrote of a "strange huge meteor-procession" in such vivid detail that scholars have debated the possible inspiration for decades.

Now, a team of astronomers from Texas State University-San Marcos has applied its unique brand of forensic astronomy to the question, rediscovering one of the most famous celestial events of Whitman's day--one that inspired both Whitman and famed landscape painter Frederic Church--yet became inexplicably forgotten by modern times.

"This is the 150th anniversary of the event that inspired both Whitman and Church," Donald Olson said. "It was an Earth-grazing meteor procession."

Fires in the sky

Whitman, known as a keen observer of the sky, included significant references to contemporary as well as cosmic events in his poem "Year of Meteors. (1859-60.)" published in Leaves of Grass. A "great comet" in the poem that appeared unexpectedly in the northern sky is readily identified as the Great Comet of 1860, which follows the path Whitman described and was seen by most of the world.

From Whitman's description, the Texas State research team immediately suspected the other celestial event he wrote about was the rare phenomenon known as an Earth-grazing meteor procession.

An Earth-grazing meteor is one where the trajectory takes the meteor through the Earth's atmosphere and back out into interplanetary space without ever striking the ground. A meteor procession occurs when a meteor breaks up upon entering the atmosphere, creating multiple meteors traveling in nearly identical paths.

The rarity of meteor processions, however, has proven problematic to scholars. Whitman's description has alternately been ascribed to the 1833 Leonid meteor storm, the 1858 Leonids and a widely-observed fireball in 1859. Although Whitman is documented as having observed the 1833 Leonids, the Texas State researchers were able to discount that meteor storm because the timeframe conflicts with the poem's, and Whitman's descriptions of the two events are very different. The 1858 Leonids were also discounted after the research team discovered a dating error misattributing some of Whitman's observations of the 1833 Leonids to the latter year.

The art of rediscovery

A chance clue from the 19th century artist Frederic Church proved key to unraveling the mystery. A decade ago, Olson saw a painting on the back cover of an exhibition catalog which showed the scene Whitman had described. Church's painting, titled "The Meteor of 1860," clearly depicted a meteor procession. Not only that, but the catalog gave the date of Church's observance: July 20, 1860, well within the timeframe of Whitman's poem. An accomplished landscape painter, Church was a member of the Hudson River School, living beneath the same skies as Whitman.

"We went to Church's house, and the people who know him and his art well, who've studied him, say, 'Oh, he wouldn't have painted it like that based on somebody's say-so. He must have seen it,'" Olson said. "The artist and his wife, who were honeymooning that summer, kept the painting in their bedroom for many years."

"We went to a small research library and found old diaries of Theodore Cole, a friend of Church's, from July of 1860," Pope said. "They tell us Church was, in fact, in Catskill, New York, so he wasn't off in some far distant land."

Armed with this intriguing new date, the Texas State researchers began poring through newspapers of the time for verification. What they found surprised even them. A large Earth-grazing meteor broke apart on the evening of July 20, 1860, creating a spectacular procession of multiple fireballs visible from the Great Lakes to New York State as it burned through the atmosphere and continued out over the Atlantic Ocean.

"Any town that had a newspaper within all those states is going have a story on this," Olson said. "We have hundreds of eyewitness accounts, but there are probably hundreds more we don't even have.

"From all the observations in towns up and down the Hudson River Valley, we're able to determine the meteor's appearance down to the hour and minute," Olson said. "Church observed it at 9:49 p.m. when the meteor passed overhead, and Walt Whitman would've seen it at the same time, give or take one minute."

Some of the most influential publications in the U.S.--including the New York Times, Smithsonian and Harper's Weekly--devoted major coverage to the event, and countless letters about it were published. Scientific American went so far as to declare it "the largest meteor that has ever been seen."

"They describe it just as Church painted it. It was visible for about 30 seconds, and passing horizontally, so it was, in fact, an Earth-grazer," Pope said. "A really cool part is that the Catskill newspaper describes it as dividing into two parts with scintillations, exactly like the painting."

This broad public attention, as well as study by many professional astronomers of the day, made the meteor procession of 1860 one of the single most famous celestial events of its day, and quite possibly the most documented meteor appearance in history. Despite this, memory of the dazzling event faded so much that by the middle of the 20th century scholars were left puzzled over what Whitman had actually seen.

"Its appearance, right before the Civil War, at a time growth and anxiety for America, made it a metaphor and portent in the public imagination," Marilynn Olson said.
Posted by Mercury at 3:51 PM