Bobby Fischer...to speak, sort of, from the grave 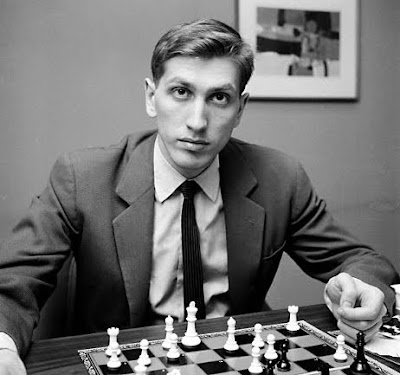 The New York Times
The remains of Bobby Fischer, the American chess champion, were exhumed Sunday night in the cemetery of Laugardaelir Church in Iceland, according to a report in The Reykjavik Grapevine.

The exhumation was ordered by the Icelandic Supreme Court last month to determine if Fischer is the father of Jinky Young, a 9-year-old Filipino girl.

Ólafur Helgi Kjartansson, the sheriff of Selfoss, the town near the cemetery; Rev. Kristinn Ágúst Fridfinnsson, the pastor of Selfoss; members of the local parish; medical staff and several other lawmen were at the exhumation to oversee it, according to the Grapevine. Fischer’s grave has already been put back as it was, according to reports.

Fischer died in January 2008. Since his death, there has been an ongoing fight over his estate involving competing claims by Marilyn Young, Jinky’s mother; Miyoko Watai, the head of the Japanese Chess Association, who said she married Fischer in 2004; and two of Fischer’s nephews, Alexander and Nicholas Targ.

The estate is said to be worth at least $2 million and Fischer left no will.

Marilyn Young filed her claim in Iceland last November. Among the documents she provided were pictures of her, Fischer and Jinky, and postcards to Jinky signed “Daddy” that she said were from Fischer. She has also produced records showing that Fischer gave her money in 2006 and 2007 for Jinky, according to RUV, a public broadcaster.

Young had sought to retrieve samples of Fischer’s D.N.A. from the National Hospital of Iceland, where he died. But none had been preserved.

Bobby Fischer [Wikipedia]
Posted by Mercury at 9:36 AM

whew.....dodged that one did i not!! now about that Bulgarian...just nasty rumors