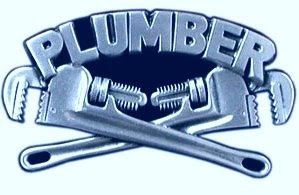 See how simple things malfunction...the ISS toilet is partially broken. Fortunately they aren't far away and the shuttle Discovery is scheduled to be launched this Saturday [May 31st, 2008] with an on-board union plumber from Acme Plumbing with necessary supplies. [This emergency weekend craft call by Bruno will cost NASA big bucks.] But suppose the event happened near Jupiter. Just another reason to hold back manned space exploration until these issues can be resolved on-board the craft.

May 28th, 2008
The international space station's lone toilet is broken, leaving the crew with almost nowhere to go. So NASA may order an in-orbit plumbing service call when space shuttle Discovery visits next week.

Until then, the three-man crew will have to make do with a jury-rigged system when they need to urinate.

While one of the crew was using the Russian-made toilet last week, the toilet motor fan stopped working, according to NASA. Since then, the liquid waste gathering part of the toilet has been working on-and-off. Fortunately, the solid waste collecting part is functioning normally. Russian officials don't know the cause of the problem and the crew has been unable to fix it.

The crew has used the toilet on the Soyuz return capsule, but it has a limited capacity. They are now are using a back-up bag-like collection system that can be connected to the broken toilet, according to NASA public affairs officials.

"Like any home anywhere the importance of having a working bathroom is obvious," NASA spokesman Allard Beutel said.

The 7-year-old toilet has broken once before but not for as long a time, said Johnson Space Center spokeswoman Nicole Cloutier in Houston.

I cannot wait for the cascading humor. 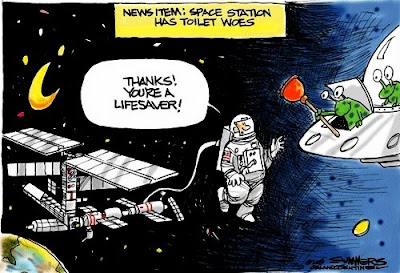 Scientific American
NASA says that the sole commode on the International Space Station is working again after a week on the fritz, but that it's not 100 percent.

The problem: a pump that separates out liquid waste malfunctioned, forcing the station's three crew members to play space plumbers.

"They swapped out lots of pieces of hardware," NASA spokesperson Nicole Cloutier said, noting, "It's still not working in the most ideal sense." To maintain pressure in the pump, she says, crew members (Russian cosmonauts Sergey Volkov and Oleg Kononenko, along with NASA astronaut Garrett Reisman) must manually add water after every three flushes. She says final repairs will likely be made next week when Space Shuttle Discovery is scheduled to arrive bearing gifts of toilet hardware.

Over the weekend, the crew briefly switched to a toilet on the Russian Soyuz capsule docked with the station that is used for return flights to Earth and has a few days' capacity. They had also been grappling with baglike "wring collectors" that attach to the toilet and bypass the pump.

Space has never been the easiest place to find a bathroom. In microgravity, urine forms floating spheres and feces have no force to separate them from the buttocks. Space toilets use fans to create airflow that pulls urine down the drain, to be either recycled or ejected from the vehicle.

Ejecting liquid waste has caused problems in the past. In 1984 the urine collection system on Discovery had to be shut down when a urine icicle formed that threatened to damage the craft's protective heat tiles if it stuck around and broke free on reentry.

But the urine disposal system apparently had its fans (for reasons other than the obvious): In an interview published in 1977 Apollo astronaut Rusty Schweickart called the dump of waste liquid at sunset "one of the most beautiful sights" in orbit. "As the stuff comes out, and as it hits the exit nozzle, it instantly flashes into 10 million little ice crystals which go out almost in a hemisphere … a spray of sparklers, almost," he said. "It's really a spectacular sight."

Defecating, however, is apparently a bit less majestic. The Apollo module had no privacy, let alone a bathroom. When Schweickart or one his fellow highly trained colleagues felt nature's call, they taped a plastic bag to their backsides.

"You just float around for awhile doing things with a bag on your butt," Schweickart tells ScientificAmerican.com. Then came the task of dislodging the excrement (no gravity, remember?) without spreading it everywhere. All told, Schweickart said, the process took about an hour.

But it seems like that beats the other alternative—pooping in a spacesuit that contains a "fecal containment system"—a tight-fitting pair of elastic Bermuda shorts. A glorified diaper, in other words. Schweickart said he never used one.

He says that Skylab, the first U.S. space station, launched into orbit in 1973, contained the first proper space toilet.

The space shuttle still carries "Apollo bags" for emergencies, such as the 1984 icicle incident.

"Even with failures," Schweickart says, "life today with the weightless bathroom is easier than it was in the old days."

Email ThisBlogThis!Share to TwitterShare to FacebookShare to Pinterest
Labels: ISS

now i will have to watch the late night shows for the one liners!! i think not!!! How about a NASA Port-A-John?? Liquid diet??